Israel bombs the house of Hamas' Gaza leader and obliterates a family's home in Gaza, as Hamas launches over 100 miātwitter.com/i/web/status/1ā¦w4 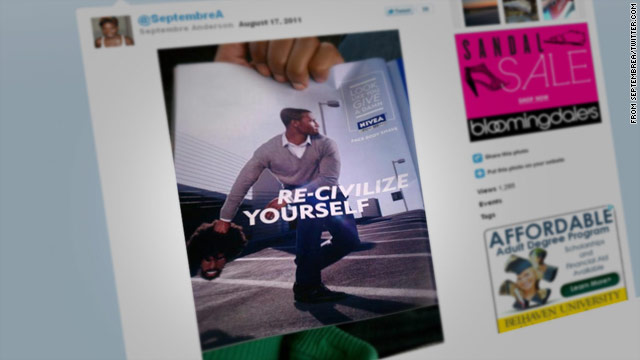 The controversial advert for Nivea for Men appeared in the September issue of Esquire
August 19th, 2011
05:05 PM ET

"I'm a 51-year old white female, and yes, this is definitely racist. What on earth were they thinking? How did this ever make it through the vetting process?"–ShellyTea

Two ad campaigns, two major underlying issues - racism and underage sexuality - had our readers arguing. In one, Nivea for Men ran, and later retracted, an ad showing a well-groomed African-American man holding what was apparently a mask of an unkempt African-American man and the slogan "Look Like You Give a Damn. Re-civilize Yourself."

The heat was so high on Twitter that Nivea almost immediately retracted the ad with an apology. Many commenters questioned whether the response would have been the same if a white man had been portrayed in the same way. In fact, there was one, which read "Sin City isn't an excuse to look like hell." Was it a racial portrayal of African-Americans? Readers who identified from both races spoke for both sides of the issue.

S1N said, "Seriously, racial? I see a mask of a black guy that looks like crap next to another black guy who is well-dressed, well groomed, and looking sharp. It's obvious which one cares about his appearance. That's the point of the ad. Hate to break it to those of you who are easily offended, but people can look like crap in any color. They can also look presentable. Sorry, but the guy in the ad is much more likely to get promoted or get laid than someone who looks like that fugly mask."

chef said, "Calling someone a 'black hole' isn't racist. Calling someone a 'tar baby' is. Referring to anyone black as 'uncivilized' could certainly, historically, be considered racially insensitive. However, would calling a young African-American street-level gang member 'uncivilized' be racist? Again this is a grey area, but I can't really think of too many black people who would be overly upset at this advertisement. I'm not black, but I do understand what it's like to be judged by racial stereotypes."

Candy S asked, "What if the photo was of a white male who was clean-cut throwing out a 'mask' of long, long hair, maybe even in a pony tail? No one would say anything to that. The ad is to clean up your look and that is it."

Anise Blue said, "The response to this ad is of course within historical context, where we all live. The United States has a history of slavery, formal and informal racism, and inequality that persists to this day. Yes, African-Americans are more sensitive to issues around race. Their grandparents and maybe parents lived under Jim Crow, you understand. All this did not happen hundreds and hundreds of years ago, removed from the current African-American experience. We have a ways to go before this is all left behind us, and the adult way to handle it is have a brain and use it."

Steven Harnack replied, "Anise, very well said! A person would have to live in a vacuum not to see that making an ad that mimics one of the core beliefs of racists would be inappropriate."

In another ad campaign, this one by French company Jours AprĆØs Lunes, little girls pose like adults to market lingerie-like undergarments for their age group. Is the clothing problematic or is it the way the children are portrayed in the ad campaign? Are they really sexually provocative or are they playing dress up? Most CNN.com readers were shocked, but some said the clothes and the campaign were kids' stuff.

David1154 said, "Disgusting. They are little girls. Let them be little girls and enjoy childhood. What's as disturbing as the ads themselves is that parents would let their kids model for it. Money talks loudly, and some people just can't tell it to shut up."

ButJ said, "This is the end of common decency in our culture. You put such thoughts into little girls, and where is the innocence anymore? What kind of self-esteem will this cause the little ones? Kids spend all day watching Paris Hilton and Kim Kardashian, and all the Disney shows are now about sex."

But EloraZ said, "The reason that all opinions on this article are AGAINST is that CNN deletes the ones who say it's no big deal. I don't think the photos or the product are a big deal at all and it would never even cross my mind to see it in an inappropriate way. It's just a clothing magazine. My comment went missing after it was posted, though. I bet this one will too!"

carlbotha agreed, "What you see when you look at these photos is a reflection of your own mind. I just see beautiful kids, imprinting on their parents, in the process of becoming adults. I see the innocence and it is beautiful. There is NOTHING sexual about it."

KarlinT said, "If the girl (ahem) 'model' in the photos did not matter why not just use a mannequin? Oh right, because that would not be sexy enough to sell lingerie! How does someone sit down in a room full of people and say 'I want to take photos of 4-year olds in panties and put them on a website' and not end up in jail? And of course little girls are going to want to be sexy after seeing ads like this, only perpetuating them as targets for sexual predators. It's just plain wrong on so many levels."

sherylsplace said, "Kids should have a childhood. Little girls need to have a balanced understanding of their value, which is more than sexual. The other issue is safety. Little girls in grade school who give off sexual messages are definitely at greater risk for attracting predators."

lostinusa said, "The clothing itself is not bad. The outfits are cute, and little girls would love them. However, they need to show the children doing what kids do: running in the backyard, chasing each other with water balloons, playing in the dirt and kicking a ball around. They are adding adult undertones that are inappropriate at best and more than a little creepy. The butt shot in the ad is pure pedo. Who the hell let that in? Some sick puppies running that ad agency for sure."

SpartyMom71 said, "I would not buy from this company. I, too, am sick of designers trying to sexualize our daughters. Sadly they continue to make these designs based on people buying these items."

jdsmyrf3 said, "Really? Go to your local Kmart tomorrow and look in the little girls' section. There is NOTHING different between the two companies other than pricing."

3:00 pm ET May 16, 2021 RETWEET
This weather reporter got caught in an on-air graphics error that "multiplied" her across the screenātwitter.com/i/web/status/1ā¦fp
cnni

2:31 pm ET May 16, 2021 RETWEET
Delta Air Lines CEO Ed Bastian tells CNN's Richard Quest that he is optimistic for a surge in US travel this summerātwitter.com/i/web/status/1ā¦Mg
cnni