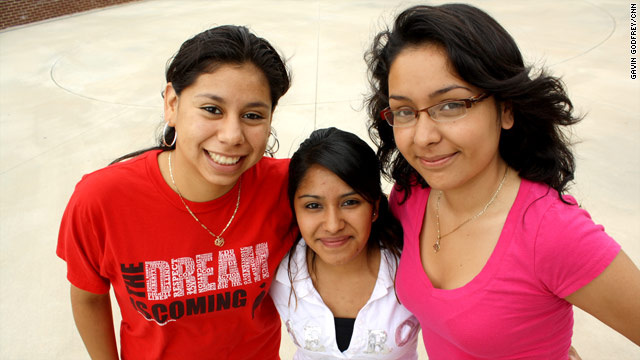 Jessica Vasquez, Nataly Ibarra and Dulce Guerrero met through through their decision to speak out about their illegal status.
August 19th, 2011
11:32 PM ET

Undocumented immigrants are 'coming out'

The Department of Homeland Security announced plans this week to review 300,000 pending deportation cases in federal immigration courts to determine which individuals meet specific criteria for removal and to focus on "our highest priorities."

That could be good news for some students who have been putting their illegal status out in the open in protests around the country. Such protests target immigration enforcement legislation or push for federal laws that would give illegal immigrants a path to become residents or citizens.

One such protest took place in Atlanta earlier this year when seven students, all undocumented, sat in the middle of a major road and blocked traffic.

"The civil disobedience we follow that from the civil rights movement," says Dulce Guerrero, 18, a recent high school graduate who ended up in a police van that day.

Guerrero and her friend Nataly Ibarra, 16, were drawn together by their choice to speak out about their illegal status despite serious consequences, including deportation.

"It is rhetorically powerful because undocumented immigrants are supposed to be in the shadows. An illegal alien is someone who isn't supposed to be around, so to say that you are coming out of the shadows means that you are flaunting the whole idea of being illegal of not belonging,â€ť said Dr. David Cisneros, a communications professor at Bostonâ€™s Northeastern University.

The Office of Homeland Security is signaling that it might be willing to give people like Ibarra a break by not prosecuting low priority cases. It's a move that could open the door for more illegal immigrants to come out.

Nearly 20 inches of rain has been reported in southern Italy, turning roads into rivers in the port city of Cataniaâ€twitter.com/i/web/status/1â€¦jw
CNNweather

1:32 pm ET October 26, 2021 RETWEET
Ditching your running watch, especially if it's a smartwatch or fitness tracker, could actually improve your workouâ€twitter.com/i/web/status/1â€¦Uw
cnni

1:30 pm ET October 26, 2021 RETWEET
Up to 2 million UK workers will be getting bigger paychecks starting in April following a hike to the minimum wage. cnn.it/3jDbTM1
cnni

1:15 pm ET October 26, 2021 RETWEET
Here are six key takeaways from the tens of thousands of pages of internal documents revealed in the Facebook Paperâ€twitter.com/i/web/status/1â€¦B9
cnni

1:00 pm ET October 26, 2021 RETWEET
The job search process usually involves a lot of waiting around. Did they get my application? Did that interview goâ€twitter.com/i/web/status/1â€¦wf
cnni