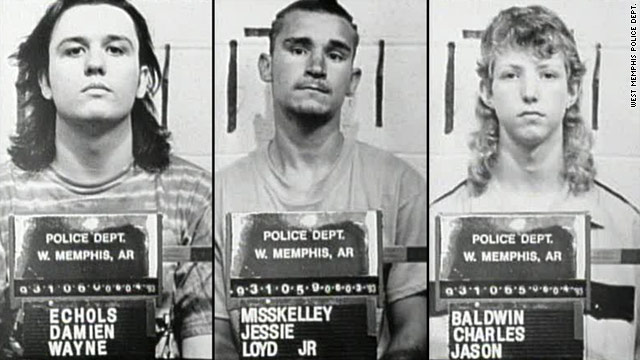 Damien Echols, Jessie Misskelley Jr. and Jason Baldwin, pleaded guilty and were sentenced to 18 years in prison with credit for time served, a prosecutor said. They were to be released on Friday.

Critics of the prosecution argue no direct evidence tied the three to the murders and that a knife recovered from a lake near the home of one of the men could not have caused the boys' wounds. More recent DNA testing also demonstrated no links, according the mens' supporters.

The case drew national attention, with actor Johnny Depp and singer Eddie Vedder and other celebrities, trying to rally support for the men's release.

John Mark Byers, whose son Christopher Byers was one of the three victims, said he believes the three men are innocent. He said releasing them without exonerating them of the crime is an outrage.

"They're innocent. They did not kill my son," Byers said before the hearing.

But the father of another of the victims, Steven Branch, blasted the apparent agreement.

"I don't know what kind of deal they worked up," Steve Branch told CNN affiliate WMC-TV. "Now you can get some movie stars and a little bit of money behind you and you can walk free for killing somebody."

Echols was sentenced to death and Misskelley and Baldwin were given life sentences in the May 1993 slayings of Steven and fellow second-graders Michael Moore and Christopher Byers. The boys' bodies were mutilated and left in a ditch, hogtied with their own shoelaces. Prosecutors argued that the men convicted, teenagers at the time, were driven by satanic ritual and that Echols had been the ringleader.

5:01 am ET August 3, 2021 RETWEET
Camera traps in East Kazakhstan have captured video of one of the world's most elusive cats for the first time sincâ€twitter.com/i/web/status/1â€¦In
cnni

4:01 am ET August 3, 2021 RETWEET
A species of tiny chameleons presumed to be extinct due to deforestation has been found, but it is clinging to survâ€twitter.com/i/web/status/1â€¦s6
cnni