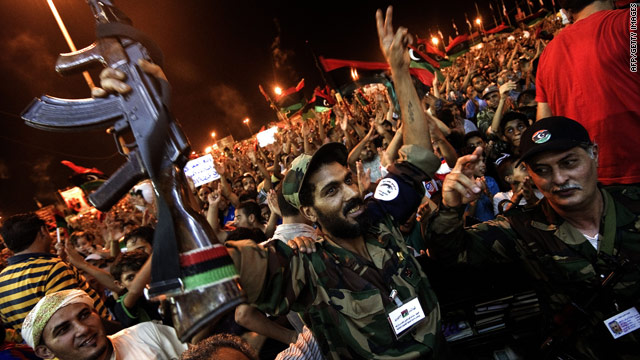 Libyans celebrate in Benghazi's Freedom Square what rebels claim to be the first uprising in Tripoli against Moammar Gadhafi's regime on Saturday.
August 20th, 2011
11:11 PM ET

"We are in our land, in our country. We have no problem if it takes six months, one year or two years, victory will be ours. This is our country and we will not leave it," he said on Libyan state TV.

"Didn't they say that today, August 20, will be the day they take back TripoliŌĆØ

[9:50 p.m. ET, 3:50 a.m. in Libya] Below are translated quotes from Libyan leader Moammar Gadhafi's televised speech a few hours ago:

"Greeting to all of you gathered at the Green Square in Bab Al-Aziziya when you were gathered earlier. I tried to join you but my security did not allow me. We congratulate you for getting rid of those rats that were discovered tonight and who were attacked and defeated by the crowds ...

We did not picture that Ramadan this year would look like this. Who transformed our happiness to Sadness? Who transformed LibyaŌĆÖs Green face to a black one? Who brought the ChristiansŌĆÖ Airplanes to kill our children everyday and applauded? Who is the Libyan who applauded as the NATO airplanes kill our Children every night and day during the month of Ramadan? Can we call such a person a Libyan, a Muslim or even a human being? Not even Satan would do such a thing...

Timeline of events in Libya

What have we done to France or Britain or Italy or Norway or the Denmark? You brought them here. You want to give them our oil. If you rule Libya, you will hand Libyan oil to the French people. Sarkozy wants to take Libyan oil and give it to his people. You are just a tool that they are using and providing with weapons so you can give him Libya on a Golden platter. This is clear to everyone...

This is not a Libyan roject, this is not the Project of any Libyan or any tribe or any young Libyan. Its impossible. The Libyan youths love Moammar...

They have lost and used everything and their last resort is their lying campaign. They will end with it the same way they started with it. Now this is the ending."

Rebel spokesman Jumma Ibrahim said clashes in Tripoli were "planned by rebels inside Tripoli in the neighborhoods of Fashloum, Souq al-Juma, Ben Ashur ... and other places." This came after coordination with other anti-Gadhafi elements, added Baja.

But speaking just before midnight in Tripoli, government spokesman Musa Ibrahim insisted that all is safe and well.

[8:20 p.m. ET, 2:20 a.m. in Libya] In a live audio address, Gadhafi blasted the rebel "traitors" and the NATO forces backing them as unethical and intent on destroying the county and ruining lives.

As he had done in a speech six days earlier, he tried to rally citizens to his side.

[8:07 p.m. ET, 2:07 a.m. in Libya] Gunfire erupts outside the hotel where CNN's Matthew Chance is staying after Gadhafi finishes his speech, Chance says via Twitter.

Gadhafi spoke on the phone live on Libya state TV, Chance said. He gave the correct date and time in an effort to prove he was speaking live, Chance said.

The broadcaster characterized the comments - which come amid reports of intensified fighting in Tripoli and shortly after a rebel spokesman's claimed that opposition fighters have taken the "revolution" inside the capital - as live.

The audio address was also aired in Tripoli's Green Square, where Gadhafi supporters were gathered.

[5:39 p.m. ET, 11:39 p.m. in Libya] Libyan government spokesman Musa Ibrahim said late Saturday that all is safe and well in Tripoli, despite reports of intense fighting and a rebel spokesman's claim that an opposition offensive had been launched in the capital.

Ibrahim added that the government of longtime leader Moammar Gadhafi remains in control of Tripoli.

[4:55 p.m. ET, 10:55 p.m. in Libya] Heavy clashes broke out late Saturday in a Tripoli neighborhood, marked by intense gunfire, explosions and people screaming as they ran through the street, a resident of the Libyan capital told CNN.

A huge statue of Jesus Christ is under construction in southern Brazil, and it will be even taller than its famousŌĆtwitter.com/i/web/status/1ŌĆ”SH
cnni

8:16 am ET April 13, 2021 RETWEET
Rain on other planets is something scientists are still striving to understand, but new research has suggested rainŌĆtwitter.com/i/web/status/1ŌĆ”pl
CNNweather