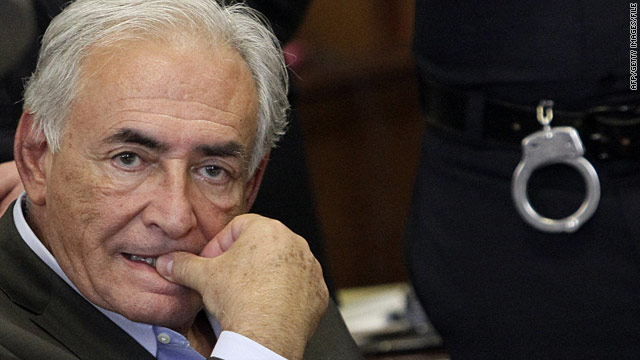 Strauss-Kahn had been indicted on charges that he sexually assaulted a woman in his luxury New York City hotel suite in May.
August 22nd, 2011
03:37 PM ET

Charges against Strauss-Kahn to be dropped, accuser's attorney says

Prosecutors had raised questions about the accuser's credibility.

Kenneth Thompson made the announcement hours after filing a motion asking a judge to halt proceedings in the case and appoint a special prosecutor.

"Manhattan District Attorney Cyrus Vance has denied the right of a woman to get justice in a rape case," Thompson said. "He has not only turned his back on this innocent victim, but he has also turned back on the forensic, medical and other evidence in this case."

There was no immediate reaction from the office of District Attorney Vance on Thompson's claim, and the office earlier declined to comment on the motion. A status hearing for the case is scheduled for Tuesday.

Strauss-Kahn was indicted on charges that he sexually assaulted the woman in his luxury New York City hotel suite in May. His attorneys insist any sexual encounter was consensual. Strauss-Kahn pleaded not guilty to the charges.

On July 1, a judge freed Strauss-Kahn from house arrest after prosecutors told the court that his accuser admitted she had lied about the specifics of her whereabouts after the incident and, in the past, in the details of an asylum application and information on tax forms. Prosecutors said she admitted lying on the asylum application about having been a victim of a gang rape, even providing details of an attack – and later admitting it never happened.

The accuser and her attorneys had said she was attacked by Strauss-Kahn, and that her case should go to trial.

US House Speaker Nancy Pelosi is expected to send the House's impeachment article to the Senate next week, accordinâ€twitter.com/i/web/status/1â€¦fJ
cnni

7:57 pm ET January 15, 2021 RETWEET
The perceived success of last week's deadly insurrection at the US Capitol is "like putting gasoline on a fire" andâ€twitter.com/i/web/status/1â€¦fv
cnni

7:35 pm ET January 15, 2021 RETWEET
New, more contagious variants of the coronavirus will likely accelerate the spread of Covid-19 and that means the Uâ€twitter.com/i/web/status/1â€¦KS
cnni

6:56 pm ET January 15, 2021 RETWEET
@grantgochin @annamajaCNN So are you Grant. So are you.
sarasidnerCNN