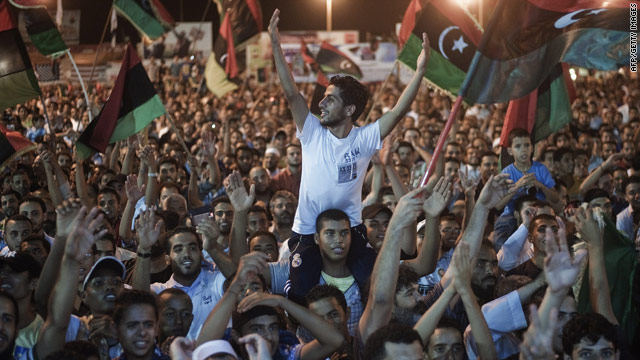 Libyans take to the streets of Benghazi late Sunday to celebrate the rebel advance on Tripoli.
August 22nd, 2011
12:32 PM ET

Digits: Libya by the numbers

18 – Countries in the Middle East and Africa with widespread anti-government protests in the Arab Spring.

3 – Days after the fall of Egyptian President Hosni Mubarak that calls go out on Facebook for peaceful demonstrations in Libya against leader Moammar Gadhafi.

42 – Years Moammar Gadhafi has been the leader of Libya.

3 – Sons of Moammar Gadhafi who are reportedly in custody of rebel forces as of August 22, 2011

1970 and 1973 – The United Nations Security Council Resolutions that authorize “all necessary measures” to protect Libyan civilians.

3 – Volumes of Moammar Gadhafi’s Green Book, where he outlines his philosophical views

5 – Times Secretary of State Hillary Rodham Clinton has delivered official remarks about Libya in 2011 to date.

31 – Members of the Libyan National Transitional Council that represent cities across the country.