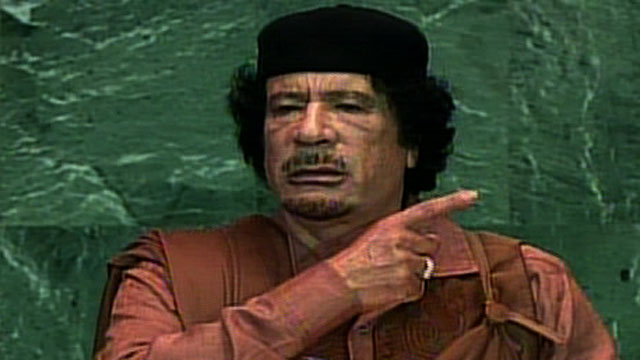 More than four decades of Moammar Gadhafi's rule may be nearing an end as rebels appear to have his regime on the verge of collapse. The embattled Libyan leader's detractors have faced off against his regime since January, but Libya's tensions pre-date the Arab Spring uprisings. Today, Gotta Watch looks at Libya's long-running, tense relations with the U.S.,  Gadhafi's family and its link to some A-list pop stars.

From friend to foe – Moammar Gadhafi ascended to power during President Nixon's administration. By the time Ronald Reagan had taken office, U.S.-Libya relations were in serious trouble. In 1986, the president decided to launch airstrikes against Libya, which killed Gadhafi's infant daughter.
[cnn-video url="http://www.cnn.com/video/#/video/world/2011/03/20/1986.reagan.us.bombs.libya.cnn"%5D

Pop stars' Gadhafi connections – What do A-listers Beyonce, Mariah Carey and Nelly Furtado have in common? They all received big bucks for performing at private parties for the Gadhafi family. When the revolution began and the connections were revealed, the stars quickly took action to distance themselves from the dictator.
[cnn-video url="http://www.cnn.com/video/#/video/showbiz/2011/03/07/wynter.private.parties.gadhafi.cnn"%5D