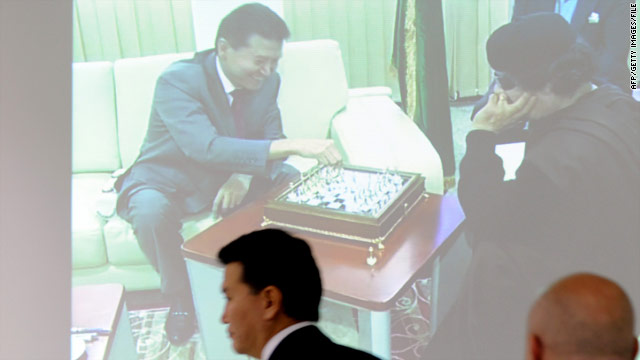 Rebels declare victory as world wonders, Where on Earth is Moammar Gadhafi?

As rebels spread triumphantly through the streets of Tripoli and word of a siege on Moammar Gadhafi's compound is met with jubilation, one glaring question surfaces: Where is Libya's leader of more than four decades?

Some rebel officials say a key to true victory - which is already being declared by many rebels and their sympathizers - is the 69-year-old leader's capture. Observers say his future holds only three possible scenarios: capture, death or exile.

Despite regular promises to fight to the death in the early days of the rebellion, Gadhafi hasn't been seen publicly since June 12, just two weeks before the International Criminal Court issued arrests warrants for him, one of his sons and a brother-in-law, alleging "crimes against humanity." Officials at the ICC have made clear they want the Gadhafis to stand trial in The Hague, Netherlands, if possible.

At the time, Ilyumzhinov quoted Gadhafi as saying he had no intention of leaving Libya. The tune hadn't changed Tuesday when Russia's Interfax news agency caught up with Ilyumzhinov, reporting the chess federation chief had spoken with Gadhafi and his son, Mohammed, by phone and was told the Libyan leader is "alive and well in Tripoli and not going to leave Libya."

The Russian news report could not be independently confirmed, but many observers and at least one American official believe Gadhafi remains in Tripoli.

Wherever he is, professor Abubaker Saad, a former Gadhafi aide, told CNN on Tuesday that he doubted Gadhafi would hide in the warren of bunkers under his Tripoli compound.

"You have to remember that he is a military man," Saad said. "He knows they have weapons that could penetrate those bunkers. That's why I'm dismissing the idea that he's still in there."

Considering Gadhafi's public communications of late, which have demonstrated a deteriorating audio quality, Saad said the Libyan leader could be "speaking from a distance."

Given the amount of time since his last public appearance, Gadhafi's whereabouts is a matter of sheer speculation. Early suggestions were that Gadhafi might flee to a neighboring country, maybe Algeria, Tunisia or Chad.

Mahmoud Shammam, minister of information for the rebels' National Transitional Council, has said he heard reports that Gadhafi could be near the Algerian border, but "I'm not ruling out anything."

Other analysts have ventured that he may still be in Libya, either in the capital, as Ilyumzhinov claims, in his hometown of Sirte or in the nation's largely uninhabited desert region or western mountain region, areas so vast or untamed it would be difficult to find anyone there.

An American official speaking on condition of anonymity, however, said he has seen nothing to support that Gadhafi is in Sirte and said he is most likely still in the capital.

One of the more intriguing hypotheses placed Gadhafi in the basement of the Rixos Hotel, which isn't a likely candidate for bombing or attacks because it is housing many members of the Western media.

As The Atlantic magazine points out, Gadhafi has strong ties to the African Union - which has promised not to cooperate with the ICC warrant - so there are several countries on the continent where the Libyan leader might go into exile.

The magazine nixed Algeria and South Africa as possibilities but said Gadhafi could still seek safe haven in Equatorial Guinea, Tunisia or Zimbabwe. Outside of Africa, Venezuela and Saudi Arabia are options, though Christopher Boucek, a Saudi Arabia expert at the Carnegie Endowment for International Peace, told CNN that the latter is unlikely given that the kingdom has accused Gadhafi of attempting to assassinate King Abdullah in 2004.

Venezuela presents an interesting scenario, however. Though the South American country is one of 116 nations to ratify the statute empowering the ICC (Tunisia's inclusion goes into effect next month), Chavez has been an ardent supporter of Gadhafi and has characterized NATO's campaign in Libya as "imperialist intervention" aimed at seizing the nation's oil.

It seems unlikely, given that Gadhafi has said he refuses to recognize the ICC's authority, that the Libyan leader would seek refuge in any state that is party to the court - with the exception of Venezuela and certain African Union members.

Again, though, Gadhafi's whereabouts is a guessing game at this point, and NATO spokesman Col. Roland Lavoie perhaps was the most frank when asked Tuesday where Gadhafi might be.

After explaining that the regime is near its end and that Gadhafi is "not a key player anymore," Lavoie conceded he didn't "have a clue" where the Libyan leader is hiding.