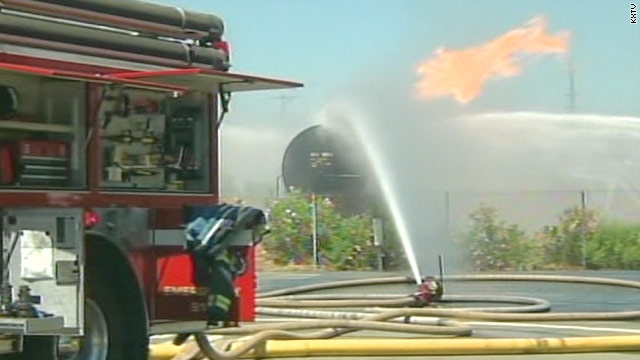 More than 4,800 families were out of their homes in Lincoln, California, on Wednesday morning as a railroad tank car loaded with propane burned nearby.

The tank car, loaded with about 29,000 gallons of propane, caught fire around noon Tuesday.

Firefighters were spraying the tank car with water to keep it cool but letting the propane burn off, Cal Fire spokesman Daniel Berlant said. Extinguishing the fire could allow a propane gas cloud to form that could cause further damage if it ignited, he said.

About 4,800 homes within a one-mile radius of the burning tank car were evacuated, Berlant said. Businesses within that radius were also closed, he said.

"The fire continues to burn. We're keeping it (the tank car) cool to keep the pressure as low as possible" to prevent an explosion, Berlant said.

The length of the evacuation depends on how long it takes for the propane to burn off, he said.

Berlant said the rail car had not derailed. It was sitting on a side track in a propane facility and was not connected to any other cars, he said.

The cause of the fire had not been determined, Berlant said.

Lincoln is in Placer County, California, north of Sacramento.