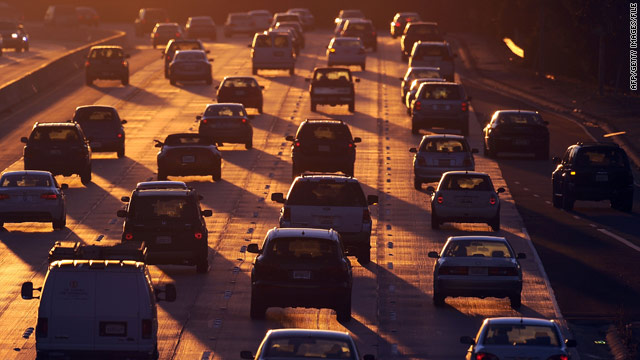 Labor Day travel: The lousy economy has put a damper on travel plans for this Labor Day weekend, according to a report from motorist group AAA.

The gloomy outlook for the economy is weighing on consumer confidence according to the report, which was produced in cooperation with IHS Global Insight. In particular, it says consumers' discretionary income has not risen enough to keep up with rising travel costs.

Despite the anticipated decline in overall travel, the number of Americans traveling by car over Labor Day weekend is expected to edge up 0.5% to 27.3 million.

Read the full report from CNNMoney.

Hurricane forecast: Hurricane Irene is forecast to become a powerful Category 3 hurricane with winds of more than 110 mph by Wednesday afternoon, according to the National Hurricane Center.Â  The storm could threaten large sections of the Eastern Seaboard, from the Carolinas northward.

Bill Read, director of the Miami-based National Hurricane Center, said the Atlantic Ocean up to Cape Hatteras in North Carolina is warm enough to sustain a major hurricane.

The hurricane center's five-day forecast map shows the storm approaching North Carolina on Saturday and hugging the coast throughout the weekend.

BART cell phones: Officials with San Francisco's transit system have scheduled a special meeting Wednesday to discuss the agency's decision earlier this month to cut off cell phone signals at select stations to ward off protests.

The Bay Area Rapid Transit's board of directors will discuss whether its officers should continue to use the controversial move that has riled up free speech activists.

On August 11, demonstrators had planned a rally to bring attention to a number of transit police officer shootings, including the death of 45-year-old Charles Hill. Hill was shot July 3 after a confrontation with officers.

4:02 am ET February 25, 2021 RETWEET
Australia has passed a new law that will force tech companies to pay publishers for news content, setting the stageâ€twitter.com/i/web/status/1â€¦UM
cnni