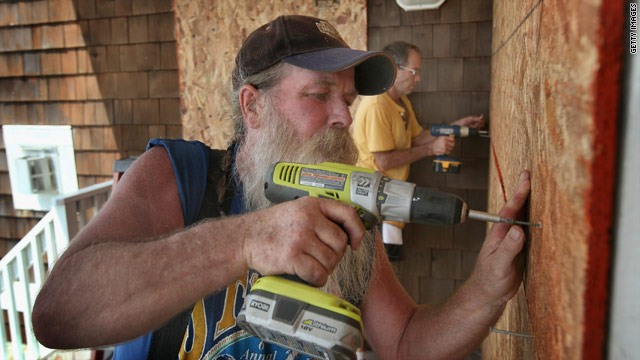 States and municipalities along the East Coast of the United States are preparing for Hurricane Irene. Here is what they are doing, following the storm's projected path, from south to north:

No evacuations have been ordered as the storm path appears to be too far east to present serious problems. However, state emergency officials are monitoring Irene and have contingency plans in place.Â  The state emergency management agency is using its website, Twitter, Facebook and YouTube to keep the public informed.

Gov. Bev Perdue declared a state of emergency for counties east of Interstate 95.

"Hurricane Irene poses a significant threat to our state," Perdue said, "and we need to take appropriate action to ensure the safety of our residents and visitors, along with property and infrastructure along our coast."

The Hampton Roads region of Virginia is at greatest risk from Irene, the state's Department of Emergency Management says.

Winds could reach 95 mph in that area, and flooding is possible throughout the eastern end of the state, the agency said.

"Irene's path is not certain, and a small change in the track could bring different impacts," said Michael Cline, state coordinator for the Virginia Department of Emergency Management. "Virginia state agencies are getting ready for the storm, and so should residents."

No evacuations have been ordered, but flooding could prompt localized evacuations. Residents are advised to pay attention to local media for announcements from their municipalities.

The U.S. Navy is sending three submarines and 27 ships based in Norfolk, including an aircraft carrier, out to sea to ride out Irene, a senior Navy official told CNN. An additional 28 ships will seek more sheltered areas.

The district was offering no specific hurricane guidance on its website, Twitter or Facebook page. Emergency officials were more concerned with the aftermath of Tuesday's minor earthquake than preparing for Irene.

Mayor Vincent C. Gray said on Twitter that there were no plans to reschedule or move Sunday's dedication of the Rev. Martin Luther King Jr. Memorial.

"Have a plan, get a kit and stay informed," Delaware Emergency Management Agency Director Jamie Turner said. "We want everyone to have food and water for at least three days, batteries for lights and radios and a means of charging cell phones.

"Remember that part of your emergency plan is to have a destination in mind if you have to evacuate. If officials instruct you to evacuate, please do it."

The eastern part of the state was experiencing heavy rain Thursday and some localized flooding from thunderstorms not associated with the hurricane.

Rainfall from Irene - expected to be as much as 7 inches in the Philadelphia area - could cause the Schuylkill River and other bodies of water to flood. Tidal flooding along the Delaware River is also possible.

"It is strongly recommended that Philadelphians living in flood-prone areas make alternative arrangements to stay with family or friends whose homes are not prone to flooding for the course of this event and until the flooding threat subsides," Philadelphia Mayor Michael Nutter's office said.

Gov. Chris Christie has declared a state of emergency. In an afternoon news conference, he also urged people to leave New Jersey Shore points before the hurricane arrives.

If the hurricane continues on its current track, then "from a flooding perspective, this could be a hundred-year event," Christie said Thursday.

Irene's current track could make it the most destructive hurricane to strike New York City since 1938.

New York City Mayor Michael Bloomberg suggested people on Long Island and living along the East and Hudson rivers take precautions such as moving furniture and valuables to upper floors, and urged them to refrain from swimming in the high surf the storm is likely to stir up.

City crews were hurrying to clean out storm drains and catch basins to minimize street flooding, Bloomberg said at a news conference.

"We don't have enough information yet to make that call. There are still too many unknowns, but we will make a decision on whether to call for evacuating certain areas based on the track, the speed, and the strength of the storm as it moves from the Bahamas up the East Coast," he said.

Irene is forecast to arrive in Stamford around 5 p.m. Sunday as a Category 1 hurricane, according to Gov. Dannel P. Malloy's office.

The Massachusetts Emergency Management Agency website features numerous articles on hurricane preparation and safety, including how to keep pets safe.

It gives instructions for following evacuation orders should that become necessary.

There is also a Cape Cod emergency traffic plan.

Rhode Island's Emergency Management Agency on Thursday urged residents to put together emergency kits to tide them over for up to three days.

There were no immediate plans for evacuations.

Officials were monitoring the storm's progress but had issued no guidance by Thursday afternoon.

New Hampshire's population has surged since the Great New England Hurricane of 1938 killed 13 people and caused $22 million (in 1938 dollars) in damage, the state's readiness site says.

"A repeat of this event today would be devastating," it says. "The state's population has more than doubled since 1938 and much of that population growth has been in areas near the coast or inland waterways. There are many more people in harm's way today."

The New Hampshire Division of Homeland Security and Emergency Management and the American Red Cross in New Hampshire have posted recommendations for hurricane preparations.

"Be prepared, and 'stay tuned,'" Maine Emergency Management Agency Director Rob McAleer said on the agency website. "Irene could bring heavy rains, high winds, storm surge or any combination of those things. Pay close attention to weather forecasts, and start now to think about your personal emergency plans. You want to give yourself enough time to take care of your home, business or boat before the storm arrives."

No official warnings had been issued.

1:28 pm ET April 17, 2021 RETWEET
Some startups are bucking the SUV trend and unveiling tiny electric cars that will carry just one or two people andâ€twitter.com/i/web/status/1â€¦WC
cnni