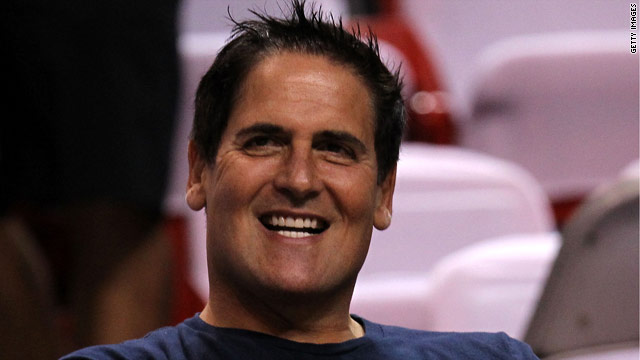 Who's in favor of college football BracketBusters? That would be Dallas Mavericks owner Mark Cuban, who made the proposal to the NCAA this month. The plan essentially would allow the top four teams in the BCS standings from conferences without championship games (and from among independents) to play an additional game in December.

It's no secret that Cuban has been looking for ways to shake up the Bowl Championship Series landscape, but if you're expecting Cuban to make a hotheaded defense against naysayers, you may be disappointed, writes SI.com's Andy Staples:

"So where is Cuban's impassioned defense of his plan? Offered the chance to discuss it, Cuban declined. He knows how he is perceived, and he doesn't want his lightning-rod status to overshadow a good idea. 'He doesn't want to be perceived as fanning the flames here,' said (Brett Morris, the man charged with building Cuban's foray into college football). 'We want to do what's best for college football. That sounds cheesy, but that's the truth.' Morris offered a statement from Cuban to use in this column, but I declined. I e-mailed Morris to let him know I had no intention of using any canned quotes from one of the most quotable people on the planet. A few minutes later, an e-mail from Cuban appeared in my inbox. 'I worked long and hard on that quote!!' Cuban protested. 'I don't get much better than that.'"

3 - Number of years of ex-Tennessee coach Bruce Pearl's show-cause penalty, which would ban him from recruiting activities should a school hire him. SI.com's Luke Winn (URL: http://sportsillustrated.cnn.com/2011/writers/luke_winn/08/24/bruce.pearl.penalties/index.html ) takes a look at where Pearl goes from here.

9 - Number of titles U.S. Open No. 1 seed Novak Djokovic has won this season.

$300 million - Amount the NBA claims to have lost last season. Players and owners are expected to meet again next week to make headway in resolving the lockout.