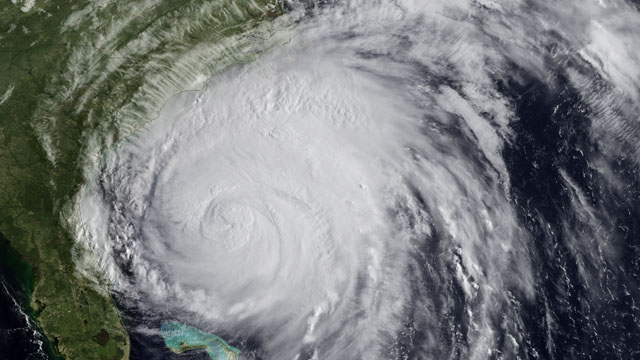 Hurricane Irene churns toward the east coast and is sure to create some memorable reporting moments.
August 26th, 2011
11:48 AM ET

Hurricane coverage generally means plenty of reporters in the rain.  They tell you to steer clear of the storm and seek shelter when they're planning to do the exact opposite. It seems odd, right? All this hurricane talk reminded us of other memorable weather moments. You've gotta watch these correspondents tackle fierce winds, heavy rain and flying debris. And don't worry, it's OK to laugh. We won't judge you.

Get back! It's coming apart! – It's like the quintessential scene of a TV reporter covering a hurricane until a large hotel sign comes flying toward CNN's Anderson Cooper and John Zarrella. Things go from not-so quaint to downright scary. Even Zarrella admitted he'd never seen anything like it before, and you could hear the tension in his voice.
[cnn-video url="http://www.cnn.com/video/#/video/weather/2011/08/26/vault.cooper.sign.falls.cnn"%5D

Weather woes – If there's one thing you learn from how news networks cover hurricanes it should be this: In the battle of storm versus reporter, the storm ALWAYS wins. Bonus: Sometimes we drag everyday people into the madness and they get soaked, too.
[cnn-video url="http://www.cnn.com/video/#/video/weather/2011/08/26/vault.moos.weather.reporters.cnn"%5D

I stand alone – For almost a minute, Gary Tuchman battled Hurricane Dolly's furious winds while trying to report. At times he almost seemed parallel to the ground as he struggled to keep his footing. All the while the storm just kept pushing him back.
[cnn-video url="http://www.cnn.com/video/#/video/weather/2011/08/26/vault.tuchman.hurricane.dolly.cnn"%5D

10:16 pm ET February 24, 2020 RETWEET
RT @maggieNYT: This comparison by @michaelcrowley of how Trump demanded Obama engage with the threat of Ebola versus his own actions is wor…
susancandiotti