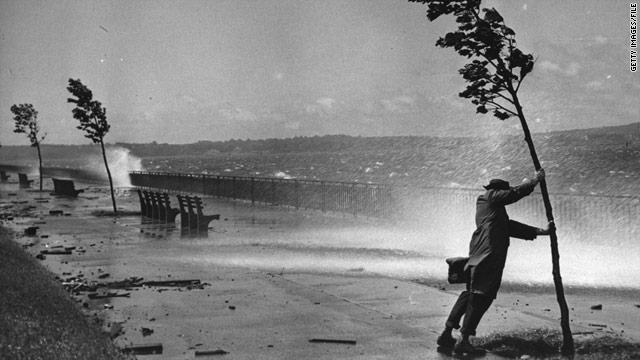 In the final week of August 1954, Hurricane Carol wheeled along the East Coast on a course closely matching the path projected for Hurricane Irene this weekend.

The storm touched the Outer Banks of North Carolina, then followed the contour of the coast, skipping across the eastern tip of Long Island and plowing into Connecticut.

Pushed by sustained winds of 80 to 100 mph and exacerbated by high tides, storm surges reached more than 14 feet in Rhode Island and Massachusetts, according to a National Weather Service archive.

The strongest wind ever recorded on Block Island, Rhode Island - 135 mph - occurred during that 1954 storm.

Entire communities were devastated in New London, Groton, and Mystic, Connecticut, as well as from Westerly to Narragansett, Rhode Island, according to HurricaneScience.org.

Yet the storm was compact in comparison to Irene. According to the historical reports, western areas in Connecticut and Massachusetts saw much lower winds and comparatively minor damage.

The hurricane lost strength as it streaked north through New Hampshire and into Canada.

Carol killed at least 65 people and destroyed nearly 4,000 homes, about 3,500 vehicles and more than 3,000 boats, according to the weather service.

Hurricanes Edna and Hazel also struck the East Coast, but Florida and the Gulf Coast were generally spared in that unusual year, according to HurricaneScience.org.