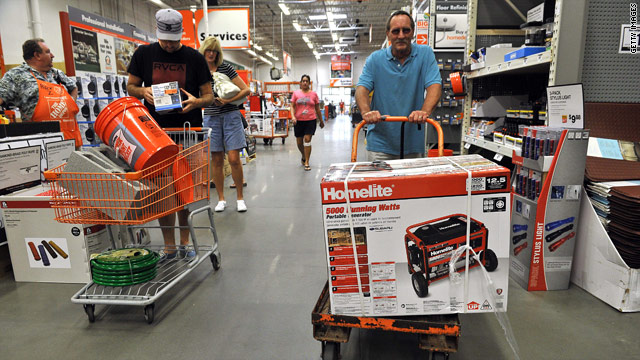 A man buys a generator Thursday in Kitty Hawk, North Carolina, in advance of Hurricane Irene.
August 26th, 2011
07:54 AM ET

On the Radar: Irene, hunt for Gadhafi, economy, funeral for troops, Mexico attack

Hurricane Irene: - All eyes on the East Coast are on Hurricane Irene as warnings and watches have been issued all along the Atlantic seaboard. The storm is expected to make landfall Saturday in North Carolina and later could bring severe flooding to New York City.

Libya: - Fighting continues Friday around Tripoli's airport and in pockets of the Libyan capital as rebels try to hunt down deposed leader Moammar Gadhafi. More of Libya's frozen assets need to be released to guarantee a successful transition, Mahmoud Jibril, chairman of the rebels' National Transitional Council, said Friday in Istanbul.

Funeral for U.S. troops - Some of the 30 service members killed in the August 6 helicopter attack in Afghanistan will be buried during a funeral service Friday in Virginia, officials said. "The burials will offer an opportunity for family members of the fallen, and fellow service members, to share intimate moments together while paying their final respects to these fallen heroes," the Arlington National Cemetery said in a statement. The statement did not specify how many would be buried.

Mexico casino massacre: - At least 53 people were killed and numerous others injured in an attack on a casino in Monterrey, Mexico, local officials said. As many as six people set the casino on fire, witnesses said.