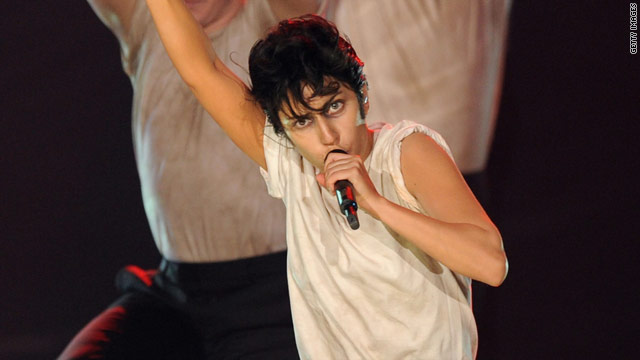 Overheard on CNN.com: Was Gaga awesome or over the top?

"You'll feel better about it when this generation gets off your lawn."–leeclayton

Way to steal the show, Beyonce!

Ladies may have walked off with most of the awards at this year's MTV VMAs, but it was Lady (make that "Lad") Gaga and Beyonce with Baby who apparently stole the show. Lady Gaga's act as alter ego "Joe Calderone" entertained or annoyed CNN.com readers, while many were equally charmed or annoyed by Beyonce's baby announcement.

carnac95 said, "Lady Ga Ga seems to have stopped focusing on her music: It's all about shock factor at this point." Peace said, "My first thought, 'Karate kid has an evil twin'? HaHa!"

San Jose said, "She is a performer! An entertainer! And I was definitely entertained. It would be annoying if she couldn't back any of her acts with actual talent, but she has a really amazing voice. Gaga is extremely creative and talented, and I can't wait to see what she comes up with next!"

But Guest disagreed: "I really wish Gaga would cut the antics. She can play the heck out of a piano and can sing her booty off. I'd like to focus on that rather than get distracted by the ridiculous costumes, and what I guess you would call her 'stunts.' It would be a shame to see her become a cliche of herself."

Many said that Lady Gaga's impersonation had been done first by Annie Lennox. praxisjg3 said, "Although Gaga is shaking things up and keeping things interesting, at times, she took the Annie Lennox 84 Grammy performance concept and just twisted it into her 2011 version." PaKyes said, "I was hoping someone would remember. Lady Gaga was not the first to do this!"

teddy said, "Gaga is a disturbed individual. Yes, Annie Lennox and Madonna did do these types of performances at the VMA's, yet they were done with more class, professionalism, meaning and artistic credibility. This Gaga guy (or girl) is just gross, boring, untalented and, obviously, insane. I see nothing authentic about Gaga."

Readers argued about whether Beyonce's news was, well, news.

Erik asked, "Why do people care about stuff like this? So mind boggling that you actually are excited about some super rich stranger being pregnant." Entertained replied, "The point of entertainment is to make your audience feel good and she did that in a non-sleazy way. She sang a great song, performed well, then made everyone howl with enjoyment over the revelation of a baby being born. At least a million people were touched by that moment."

BMike said, "Beyonce really did steal the show – in a classy, personable and real way." Karinne said, "OK, she didn't steal the show with the baby news, she stole the show with a great performance. I am not a Beyonce fan, but I am impressed by someone who can perform and sing LIVE. Chris Brown just danced a lot, he did not even sing a word!" Bostonian01 said, "Unlike the Kardashians and the Snookies, she is a talented star who deserves a little publicity."

Many CNN.com readers responded from both sides of the divide. Some said the story was propaganda and expressed frustration with their lack of work hours and health insurance. wowlfie said, "I can't believe news reporters believe all this BS!" reality2012 said, "What a stupid story! There are millions of people in the USA desperate for full-time work still–they are losing their homes and cars!"

MadeinsUSA61 asked, "How many people did you interview for this article? A mom with a spouse and second income? A recent college grad? Interview a head of a household with kids and a mortgage and ask them if being underemployed working part-time jobs is 'just fine.' This article is so out of touch with reality, it's laughable."

firefly2 said, "I have a Masters Degree. I am not OK with my part time job ($12/hr) and no benefits. I have been trying for four years to get a full-time job with benefits. Most of the time I don't even get an interview. Several times I have made it to the interview stage only to find out the job was never really open. This writer tries to put a positive spin on what seems to be a permanent drop in family incomes. Maybe CNN should consider firing their full-time staff and hiring part-time workers with no benefits. Then the articles might represent what is really happening."

svann said, "Part time would be fine if it included health insurance."

But many CNN.com readers shared how going part-time had actually improved their lives. CoFlyBoy said, "Well, believe it or not, for some people life is more important than the almighty dollar. I learned so myself after losing my 60 hour/week, 100K/year job in 2008 and being forced to go part time. I was forced to downsize big-time. So what if I no longer have my jet-skis, my house, and too many toys but no time to play with them? So what if my credit is in the toilet? I now enjoy LIFE much more without all the burden of having to pay for it all: riding a bicycle, hiking, camping, doing the things I enjoy in life is much more important now that I have time to enjoy life."

JRJNYC said, "I work voluntarily 32.5 hours per week in a part-time job with benefits. Previously, I worked in a job that was supposed to be 40 hours per week, but ended up being 60-70+. I had very little time to spend with my wife and do the things that we like to do. When I did have time, I was too tired to enjoy myself. We downsized our apartment, went to one car, and modified our lifestyle to accommodate 20 percent less income. We are enjoying ourselves much more: less stress."

But specter619 replied, "You must be blessed with a good-paying job, bro. A lot of us were already down to one car and just getting by before we got our hours cut. We didn't reduce our carbon footprint by choice. Though more family time is awesome for everyone (I have a 1 year old), feeding, clothing and housing them takes priority right now."

And there were those who told about working too many hours. Corbin said, "Wish I could work full time; 40 hours a week sure would be better than the 55 I put in to make ends meet."

sc2pilot said, "I reduced my hours and only work part-time now, and I have to say I love it. It's amazing how much of a difference that extra 10 hours per week makes. Working 65 hours/week was difficult, but now that I only work 55 hours, I have lots of time to get other things done."

4:32 am ET October 29, 2020 RETWEET
Samsung reported bumper profits on Thursday, but warned that things won't be so rosy in the coming months as smartpŌĆtwitter.com/i/web/status/1ŌĆ”6D
cnni

4:16 am ET October 29, 2020 RETWEET
After its sellout "flight to nowhere," Qantas is opening a special one-off route to Uluru and dubbing it the "flighŌĆtwitter.com/i/web/status/1ŌĆ”S2
cnni

3:51 am ET October 29, 2020 RETWEET
Researchers have created the world's smallest boat, measuring just 30 micrometers in length, so small it could sailŌĆtwitter.com/i/web/status/1ŌĆ”yp
cnni

3:31 am ET October 29, 2020 RETWEET
Alexandria Ocasio-Cortez has been unveiled as Vanity Fair's latest cover star, less than a week before she concludeŌĆtwitter.com/i/web/status/1ŌĆ”iZ
cnni