Scientists tracking one of Africa’s most elusive and poorly understood animals say they’ve recorded a rare - and possibly the only publicly released - video of the species in the wild.

The video, recorded by a motion-activated camera placed in a Gabon forest, shows an African golden cat: a shy, medium-sized feline that ducks human contact and lives in hard-to-access parts of central African forests. 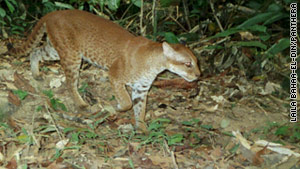 A motion-activated camera captured this image of an African golden cat in Gabon, and the video above.

“As far as we know, it’s never before been filmed (in the wild) for ... the public domain,” said Luke Hunter, president of Panthera, the conservation group providing most of the funding for the team that captured the video in July.

The footage, photos and other information that the team is gathering - part of an effort to get a population estimate in certain areas of Gabon’s forests - could contribute to a greater understanding of the species. The International Union for Conservation of Nature, which lists the animal as near-threatened, says it is not only infrequently observed in the wild, it is “Africa’s least studied felid.”

Graduate student Laila Bahaa-el-din is leading the survey team, which hopes its population estimates in four categories of Gabonese forest can give governments, logging companies and other groups useful information to help preserve the species.

“I don’t think I can put (capturing the video) into words,” Bahaa-el-din said of the rarity of the footage. “I live and dream golden cats most days. To get back to camp and put the (footage) on the computer and have this cat basically posing for the camera, it’s incredible. I watched it five times in a row and pretty much didn’t sleep that night.”

Bahaa-el-din said the video was captured in one of Gabon’s better-managed logging concessions: an area leased to a logging company. After she and a field assistant spent three weeks prospecting the area, they set 40 sets of still-camera traps, each activated by motion, and returned to collect photos roughly every two weeks for a seven-week period. After photos showed that a golden cat was getting close to one camera, she decided to set a video camera at that station.

Days later, she had several clips of an African golden cat walking and lounging during the day and one at night, chasing what appeared to be a bat.

Bahaa-el-din will survey three more areas through 2012: a more loosely managed logging area; an area where humans hunt; and pristine forest. Besides taking photos, the team is checking waste from golden cats and leopards to determine what those animals are eating and whether humans’ hunting of leopard prey is forcing leopards to compete with golden cats for food. 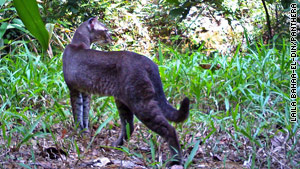 Many of the team

The data could show whether golden cats thrive better in better-managed logging area than loosely managed ones and whether different hunting regulations would be useful, Bahaa-el-din and Hunter said.

The golden cat is so shy and limited to deep forests, people rarely get glimpses of them in the wild, let alone snap pictures. Thus the animal has hardly been studied, said Hunter and Bahaa-el-din, who is registered with South Africa’s University of KwaZulu-Natal, in partnership with the University of Oxford’s Wildlife Conservation Research Unit.

And the survey may challenge at least one belief about the animal.

“Until now, if you read things on the Internet and in (scientific) literature, they’re called nocturnal or crepuscular (active at dawn or dusk),” Bahaa-el-din said. “But a large number of photo captures I get are during the day.”

The International Union for Conservation of Nature says that although there are no reliable density estimates, the world's population of mature golden cats probably exceeded 10,000 in 2007.

Several experts of African wildlife said the Panthera video is very rare. One, Tom Butynski, director of Saudi Arabia’s King Khalid Wildlife Research Center, said he has seen one video of an African golden cat in the wild, taken in March in Kenya. That video, however, doesn’t appear to be in the public domain.

“Still photos are nice, but the video can raise the public profile of the species, which is important,” said Bahaa-el-din’s field supervisor, Philipp Henschel. “I hope this video gets people like nonscientists interested in the species and ... thinking about conservation of the animal.”