‚ÄúAt least in the guidance we were looking at there was no indication of anything that would cause the storm to weaken. So, we thought we would have a Category 3 at landfall,‚ÄĚ said Bill Read, the director of the Hurricane Center. Irene came in at a Category 1, the weakest. Read said there‚Äôs good reason they were so far off.

The science of forecasting how strong or weak a storm will become is simply not very good. With Irene, forecasters say they weren‚Äôt even as good as their five-year average.

‚ÄúEvery storm comes up with a surprise,‚ÄĚ Read said. ‚ÄúIn this case it was one where it went downhill. Charlie a few years ago is one that went uphill. Neither case did we see that coming, and that‚Äôs my measure of the fact that we have a long way to go.‚ÄĚ 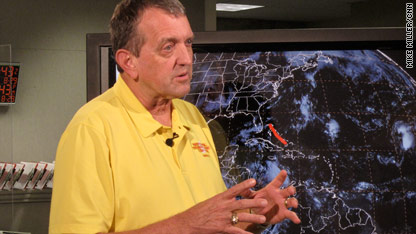 ‚ÄúI‚Äôd say a bigger worry than one weakening at landfall is the ‚Äô35 hurricane that came through the Keys," Read said. "Charlie if it‚Äôs a little bigger. Audrey in 1957. Get the picture?‚ÄĚ

In all of these cases, the storms rapidly intensified as they neared the coastline. By then, it‚Äôs too late to order massive evacuations.

‚ÄúReal-time observations, like that collected by NOAA‚Äôs Hurricane Hunters, are put into these models to hopefully give a more accurate forecast. We are much more accurate on forecasting severe storms and their behavior for this very reason, the availability of observations," CNN meteorologist and weather producer Sarah Dillingham said. "These storms occur over land, allowing scientists to take measurements within those storms and use that data to run computer models. Think about a hurricane, over water, with no way to collect data except from above.

"The track of these storms depends on atmospheric winds and surrounding storm systems, and we understand these factors much better, giving us a better handle on the 'steering' of these systems," she said. "This makes tracking more accurate overall. Things like RI, or rapid intensification, in tropical cyclones is just not fully understood yet, and until we can obtain that vital observational data within these storms - while they are over open, warm waters - we will struggle to model these kinds of processes.‚ÄĚ

‚ÄúWe had storm surge flooding all the way up from the Carolinas into New England," Read said. We‚Äôve had tremendous and tragic rainfall flooding. We‚Äôve had loss of life from trees down well inland and the power outages.‚ÄĚ

Hurricane forecasters admit their ability to foresee a storm‚Äôs strength is not much more today than it was 20 or 30 years ago.

According to the¬†Hurricane Center‚Äôs initial analysis, ‚ÄúIrene exemplifies the state of the science.‚ÄĚ They are pinning their future hopes on programs like the Hurricane Forecast Improvement Project. Scientists say they are seeing some promising results. This program uses high-resolution models and enhanced Doppler radars to measure the core of Hurricanes.

Forecasters say that three out of four times you will likely be asked to evacuate and you‚Äôll coming back saying "Why did I leave?"

But that fourth time, if you don‚Äôt, Read says, you‚Äôll wish you had.

8:55 am ET July 2, 2022 RETWEET
ūüíź There's a strategic reason behind the prominent placement of flowers in your local supermarkcnn.it/3yCpJGlkwd
cnni

8:55 am ET July 2, 2022 RETWEET
ūüíź There's a strategic reason behind the prominent placement of flowers in your local supermarkcnn.it/3yCpJGlkwd
cnni