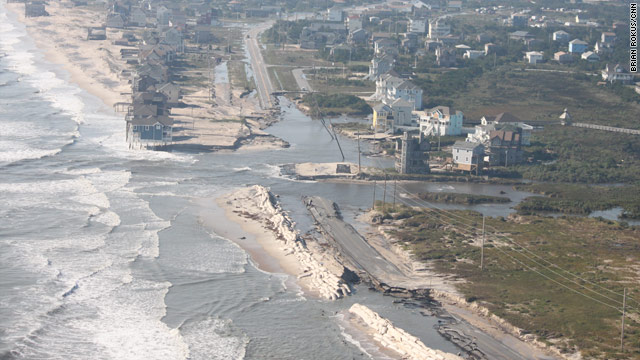 Hurricane Irene severed North Carolina Highway 12, the route that connects the islands of the Outer Banks, in four places, raising questions about how many times taxpayers will have to pony up to fix the roadway.

In 2003, Hurricane Isabel cut a gap in the road that took two months and $5 million to fix, according to a report in the Raleigh News & Observer. This time, the damage to the road is worse, officials said.

(See a North Carolina Department of Transportation map of the breaches.)

North Carolina Gov. Beverly Perdue told CNN affiliate WRAL-TV that two of the breaches are bigger than what has been seen before and that the surf is continuing to erode them.

One of the four breaches presents a particular problem, CNN affiliate WAVY-TV reported. It is a gap about 250 feet wide in which the foundation of the road has been washed away, meaning repairs will be more extensive.

But Perdue says no matter how bad the damage, the road will be repaired.

"There are going to be those from across the country saying, 'Why are (you) investing in that road again?' " she is quoted as saying by CNN affiliate WRAL-TV. "Until we can find a better way to move on and off (the islands), they are North Carolina citizens, they pay taxes and they have got to have a highway, road or bridge to travel on the same as the rest of us."

"If we get one or two more of these (storms) in September and October, you're going to have a whole bunch of holes in the Outer Banks out there," the paper quotes him as saying.

Even the state Department of Transportation acknowledges that its a price that will have to be paid again and again. A 1991 study found that "six sections of NC 12 on Hatteras and Ocracoke Islands frequently need extensive maintenance due to severe storm and erosion damage," the department says on its website.

Riggs tells the News & Observer that those extensive maintenance efforts in the end only make erosion problems worse because they prevent the migration of the Outer Banks, as the islands want to grow on their western side and shrink on the ocean-facing east side.

Of course, the question of how often taxpayers should pay for the few who live on fragile oceanside property is not a new one, and in some cases, the answer is not to rebuild. For instance, after Hurricane Ike wiped out much Gilchrist, Texas, in 2008, the Federal Emergency Management Agency paid for a county plan to buy out the owners of lost properties, with the stipulation they not build there again.

Of more immediate concern on the Outer Banks on Tuesday was how to get services to the 2,500 people stranded on Hatteras Island by the breaches in the highway.

"There is no power on Hatteras Island, and at this point, that is my biggest concern," Sandy Sanderson, director of Dare County Emergency Management, told WAVY.

"We are using a ferry service to get commodities to the island. We need residents to be patient. They are going to have to adjust getting on and off the island," WAVY quoted Sanderson as saying.