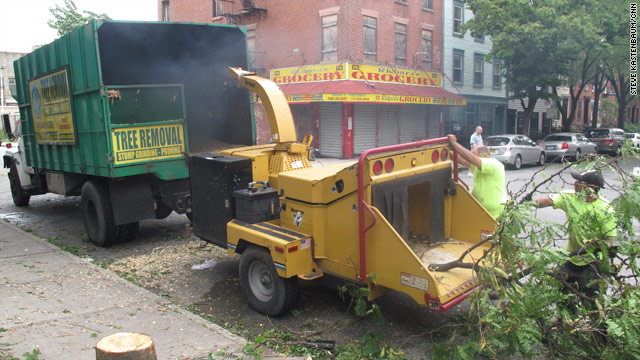 Picking up the pieces - and making money - after Irene

Irene’s winds uprooted thousands of trees in and around New York on Sunday, leaving plenty of debris to clean up this week. Fallen branches littered communities for hundreds of miles around. At least 2,000 trees were downed in New York City, according to Mayor Michael Bloomberg.

“Let me remind New Yorkers: It really is a bad idea to cut down or remove trees yourself. Leave it to the professionals,” the mayor said during Monday morning’s update on the storm cleanup.

One of those professionals is Anthony Dragonetti. He and his family own Dragonetti Brothers, a landscaping and tree removal business in the city. Shortly after the storm had passed, Dragonetti was cleaning up the mess in Brooklyn, New York.

“Every tree that’s leaning down or down on the floor, we’re cutting it up, putting it in the chipper and getting out of here,” Dragonetti said. He expected to be busy for a few weeks. “There’s a lot of downed trees, downed trees all over the place,” he said.

Dragonetti’s services don’t come free of charge. There is money to be made in storm cleanup. An informal survey of several landscaping business found that the going rate for the removal of a small tree lying in a front yard is a few hundred dollars. But the bill can increase dramatically. If a very large, old tree fell through the back wall of a home, and it’s not easily accessible, that’s a more complicated job. A crane would need to be called in, and a crew would have to work slowly to not cause any more damage. A job like that can cost up to $5,000.

Click the audio player to hear the rest of the story: