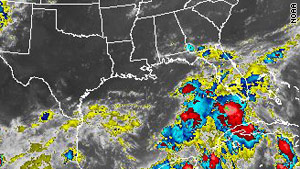 “Most computer models are developing this into at least a tropical storm, if not a hurricane within the next two days,” CNN Meteorologist Jacqui Jeras said Wednesday evening.

“There is a ton of potential for flooding,” Jeras said. “One computer model solution here (puts) as much as 6 to 12 inches of rain on the Gulf Coast by Saturday morning.”

The system has a 60 percent chance of becoming a tropical cyclone in the next 48 hours, the hurricane center’s 8 p.m. outlook said.

Shortly before 11 p.m., Katia was about 1,165 miles east of the Caribbean Sea’s Leeward Islands, moving west-northwest near 20 mph.