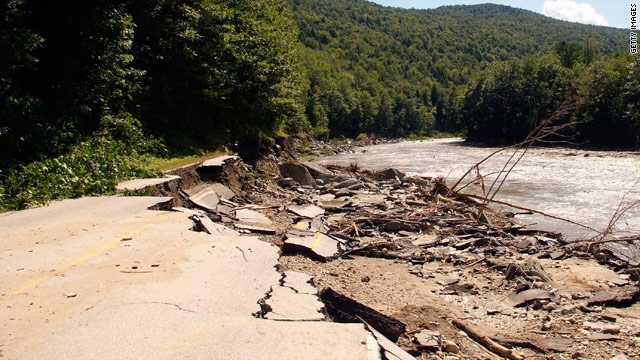 On the Radar: Atlantic storms, Libya and Petraeus' promotion

Irene recovery under way as Katia forms - States in the Northeast - particularly Vermont, New Jersey and New York, which saw the worst of Irene's wrath - were struggling with basic recovery efforts: rebuilding roads and bridges, restoring power and stemming the flow of floodwaters after Hurricane Irene struck this weekend. The Passaic River in northern New Jersey was still making the town of Little Falls look more like Niagara Falls. A resident in Montclair said the Passaic was high before Irene, but after the hurricane's rains, "the river began to rage."

One Vermont town hit hard by Irene decided to look for a silver lining. Some Pittsfield residents - there are only 427 of them in all - decided to throw a barbecue. Homes were underwater and roads were impassable, but they nonetheless gathered at a local park for hot dogs and hamburgers. Said Jason Evans, owner of the ski town's Clear River Tavern, "No one in this town was expecting the flooding to be what it was, and we've all gotta eat."

Meanwhile, Tropical Storm Katia was strengthening in the Atlantic Ocean and threatening to become a hurricane by Wednesday afternoon, the National Hurricane Center said. Early Wednesday, the storm was almost 1,000 miles west of the Cape Verde Islands, moving west-northwest at 21 mph. Katia could grow into a Category 3 hurricaneÂ with maximum sustained winds of 115 mph by Saturday evening, forecasters said. It is too early to say if or when the storm will make landfall.

Gadhafi on the ropes? - Libyan rebels said time is running out for Moammar Gadhafi, whose trove of family photos has been uncovered. A deadline looms for his loyalists to disarm, and a minister in the National Transitional Council said, "I think this thug, this killer knows that he has nowhere to go." He further predicted that the official end of Gadhafi's 42-year rule would come within a week. Remember, however, that Gadhafi's whereabouts remain unknown and rebels have reported finding or surrounding him in the past, but the claims have turned out to be inaccurate.

As if Tripoli needed another crisis, one is unfolding at the city's zoo. The facility was struggling to function Tuesday, and a CNN correspondent, after finding the gates locked, was told that the zoo was being renovated and that there were no animals there. A big cat's roar from within the zoo suggested otherwise. Inside were a tiger, lions, giant tortoises, hippos, hyenas, bears, monkeys, deer, emus and other animals. They all appeared undernourished, and there was little or no food or water to be found.

In another heartbreaking story emerging from the war-ravaged nation, a 19-year-old woman spoke from her hospital bed about how she was forced to become an executioner for Gadhafi's forces. With an armed rebel guard at her door, the woman, Nisreen, recalled some of the 11 killings she had performed. She said she was told she would be killed if she didn't kill Gadhafi's enemies. "I would turn my head away and shoot. I saw the blood dripping, it just kept flowing," she said.

Movin' on up - U.S. Army Gen. David Petraeus, who served as the top U.S. commander in Iraq and then Afghanistan, is hanging up his uniform soon. Petraeus worked with the CIA on counterinsurgency efforts during his time as a military commander, which is one of the reasons he was tapped to head the American spy agency.

The 1974 West Point grad is only 58, and some observers say they're surprised to see such a decorated military officer leave the service prematurely. "I wanted this job. ... I am taking off the uniform I have worn for 37 years to do this the right way," Petraeus said at his Senate confirmation hearing. He assumes his new role September 6.