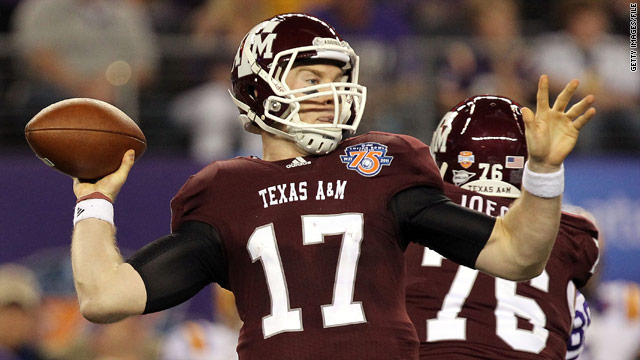 Texas A&M's Ryan Tannehill may be the last quarterback to skipper the Aggies as members of the Big 12 Conference.
August 31st, 2011
12:35 PM ET

Texas A&M Aggies on their way out of Big 12, but to where?

Texas A&M University took another step Wednesday in its bid to leave the Big 12, notifying its conference that it had submitted an application to join another league, according to a news release.

There has been ongoing speculation that the Aggies might join the Southeastern Conference, a premier athletic conference that can boast the past five national football champions. However, the Texas A&M news release did not say which conference it had applied to join.

Should the application be accepted, the Aggies will vacate the Big 12 Conference on June 30, the university said.

University President R. Bowen Loftin told conference Commissioner Dan Beebe in a letter that it was in the school's best interest to join another conference.

"We appreciate the Big 12's willingness to engage in a dialogue to end our relationship through a mutually agreeable settlement," Loftin wrote. "We, too, desire that this process be as amicable and prompt as possible and result in a resolution of all outstanding issues."

The Aggies have been a part of the Big 12 since the conference was expanded from the Big Eight ahead of the 1996-97 season. The 49,000-student institution situated in College Station enjoyed record athletic success last year, scoring nine conference championships and four national titles, according to the university.

In his letter, Loftin wrote that the school was hoping for more visibility from the move and hoped to "secure the necessary and stable financial resources to support our athletic and academic programs."

The president did not share a timeline for the move, but the university said Loftin has indicated that he didn't want a drawn-out process.

Over the weekend, the Fort Worth Star-Telegram reported that the Big 12 Conference board of directors had made enough progress on the Aggies' departure that a league source said he "wouldn't be surprised" if A&M was part of the SEC by the end of the week.

One of the sticking points, according to an A&M source cited by the newspaper, is how much money the university will be asked to forfeit. Sources told the Star-Telegram that the number could be at least $20 million.

The SEC is the only major sports conference not to be realigned in recent years. The Atlantic Coast Conference added the Miami Hurricanes and Virginia Tech Hokies in 2004 and the Boston College Eagles in 2005. The Big East added the DePaul Blue Demons and the Marquette Golden Eagles to its basketball lineup in 2005, while the Cincinnati Bearcats, the Louisville Cardinals and the South Florida Bulls joined its football schools. The Texas Christian Horned Frogs football team is slated to join the Big East next year.

The Nebraska Cornhuskers will join the Big 10 this year. The former Pac-10 is adding the Utah Utes and Colorado Buffalos this year, making it the Pac-12.

The Big 12 has lost Nebraska and Colorado but added no teams. Widespread reports indicate that the conference would like to add the Notre Dame Fighting Irish, Arkansas Razorbacks or Brigham Young Cougars to its ranks.

SEC Chairman and University of Florida President Bernie Machen was quoted two weeks ago as saying, "The SEC president and chancellors met today and reaffirmed our satisfaction with the present 12 institutional alignment. We recognize, however, that future conditions may make it advantageous to expand the number of institutions in the league. We discussed criteria and process associated with expansion."

If Texas A&M were to join the SEC, it would join a league with a storied sports history, particularly in football. The Auburn Tigers, Alabama Crimson Tide and Louisiana State Tigers have all won the BCS National Championship in the past five years, and the Florida Gators have won it twice in that time.

Though the Aggies haven't won a football championship in more than seven decades, A&M is no slouch in athletics. The school's track, softball, golf, equestrian and women's basketball teams have all won national championships in the past 25 years. Also, the football team enjoys such a fervent following that the fans are regarded as the squad's "12th Man."