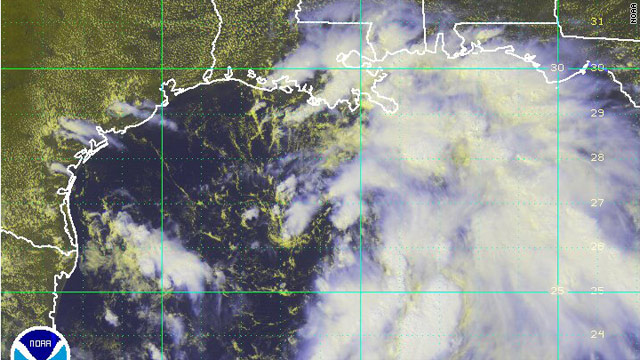 [Updated at 7:55 p.m. ET] A tropical storm warning has been issued for parts of the U.S. Gulf Coast after a tropical depression formed over the central Gulf of Mexico on Thursday evening, the National Hurricane Center said in its 8 p.m. advisory.

The system could become a tropical storm by Friday and approach the Louisiana coast on Saturday, with the potential to deliver 10 to 15 inches of rain to southern Louisiana, southern Mississippi and southern Alabama through Sunday, the hurricane center said.

Louisiana Gov. Bobby Jindal declared a state of emergency on Thursday evening because of the storm.

"What we do know is there's high wind, there is a lot of rain and it's going slow," Landrieu said of the storm in the Gulf. "That's not a good prescription for the city of New Orleans should it come this way."

Shortly before 8 p.m. ET, the storm's center was about 225 miles south of the mouth of the Mississippi River. It had maximum sustained winds of 35 mph and was moving northwest at 6 mph.

A tropical storm warning was issued for the Gulf Coast from Sabine Pass, Texas, to Pascagoula, Mississippi. Tropical storm conditions are expected somewhere within the warning area within 24 hours, the hurricane center said.