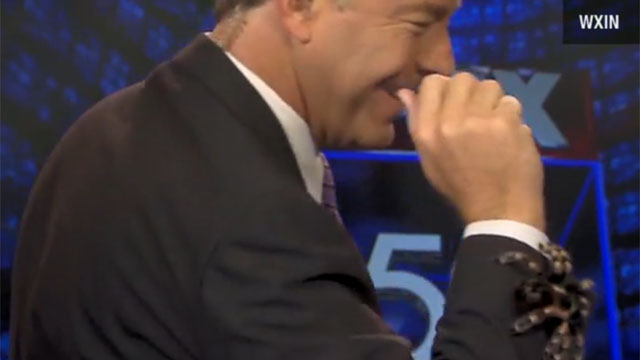 An anchorman teases a weatherman with a large spider and scares his co-worker out of the studio.
September 2nd, 2011
10:47 AM ET

Broadcast journalists are seasoned professionals, but even they can get unnerved, especially when animals are involved. You've gotta watch how nature tackles television personalities with tons of humor.

Tarantula tantrum – An Indianapolis weatherman is distracted from his forecast when the anchor teases him with a large tarantula. Watch him defend his response even as he considers leaving the studio.
[cnn-videoÂ url="http://www.cnn.com/video/#/video/us/2011/09/01/vo-wxin-spider-taunting.wxin"%5D

Is that a snake in your pants?Â – Why yes, yes it is. A python gets up close and personal with one meteorologist, slithering itself down his pants. Find out how many people it takes to unhinge this serpent from its unusual hiding place.
[cnn-videoÂ url="http://www.cnn.com/video/#/video/us/2008/08/09/vo.snake.in.pants.kcci"%5D

A not-so killer toad – It begins as wonder and awe, but quickly turns into fear and hysteria. Watch Larry King's young sons react to a toad brought on the set.
[cnn-videoÂ url="http://www.cnn.com/video/#/video/bestoftv/2011/09/02/vault-lkl-hanna-son-toad-scare.cnn"%5D

Is candy corn a trick or a treat when you put it in bratwurst? CNN's Jeanne Moos reports on the latest gross-soundiâ€twitter.com/i/web/status/1â€¦9F
cnni

11:31 pm ET October 15, 2021 RETWEET
An Apple employee who led organizing efforts against harassment and discrimination within the company said she hasâ€twitter.com/i/web/status/1â€¦2K
cnni

10:05 pm ET October 15, 2021 RETWEET
When crude oil leaked into the Pacific Ocean off the coast of Southern California earlier this month, the amount spâ€twitter.com/i/web/status/1â€¦uE
cnni