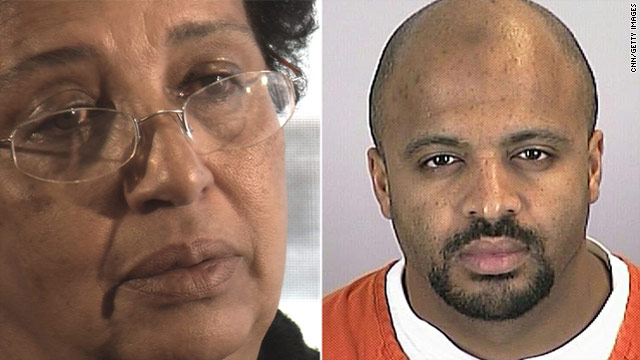 Overheard on CNN.com: Son is responsible for his own actions

Comments of the Day

"Such a nice boy... growing up hated, with schizophrenic sisters, and an abusive bipolar Dad... I just don't understand how my son ..."–CANEMAN

Zacarias Moussaoui was arrested in the U.S. three weeks before the September 11 attacks and indicted in December 2001 as part of a broader terror conspiracy. His mother, Aicha el-Wafi, blames herself for failing to realize that her son had become involved with radical Islamists. She said he grew up fatherless and subjected to daily racism in France. According to a clinical social worker, mental illness runs in the family, and Moussaoui is delusional.

CNN.com readers had some sympathy for her as a mother, but not much. Shellysmom said, "She has my sympathy as a mother until she starts claiming that her son is innocent." 13pearls said, "She denies her son's involvement while doing all this; she has an agenda even if it's just to settle her own heart. I don't care about her."

PhDinSarcasm said, "How dare you, CNN! Trying to pull at our heartstrings by showing the grieving mother of this terrorist? Sorrowful music playing underneath? This is a time of our collective grief, fear, and anger as the tenth anniversary of the mass attack on Americans on American soil is upon us. Guess what, Mum: your kid is still breathing."

Others said that regardless of his upbringing, her son's extremism was his own responsibility. alison112 said, "I think anyone who does something like this is mentally ill in some form. No sane person would do something like this. But it doesn't excuse their actions."

2HONEST4CNN said, "Lost of people get bullied or discriminated against in all nations and they do not become terrorists. Only a few twisted souls with murder in their heart do that." angryasian said, "As an Asian growing up in the U.S., I was told to 'go back to my country' and made fun of for the shape of my eyes and the color of my skin. You don't see me running off to kill people."

Merryl agreed, "Excuses, excuses. I moved to Raleigh N.C. from Poughkeepsie, N.Y. when I was five years old and was ostracized for being Jewish. I endured all kinds of name-calling. Parents wouldn't let kids play with me because of my religion. Our next-door neighbors vandalized our property continuously because they were KKK-types. I could have become some kind of radical terrorist. Instead, I am a law-abiding citizen who still lives in N.C. (views are different now), and all of my friends are Christians."

But a few readers said el-Wafi's message was a good one. PSAGuy said, "This woman is claiming she missed the signs. She is telling everyone not to miss them in their own children. This country is FULL of parents who do not deal with their children, particularly teens. These kids need firm guidance and parents who are tuned in to their lives." TonyXL said, "No dad around. Only a matter of time before trouble began..."

The5thSeal asked, "What are the signs that someone will be a terrorist? I'm just curious."

Obama's problem? No one fears him

Syndicated columnist and author Roland Martin writes that while Obama has been aggressive in the foreign arena, he has given in on far too many domestic issues, with little to show for his compromises. "When will this president strike back and exert some presidential muscle?" he asks. Many CNN.com readers expressed similar misgivings.

zamboozled said, "Mr. Obama may be a wonderful, fair and decent man; so was Jimmy Carter and Bush Senior. That does not necessarily translate into a good president. The POTUS I think, especially in these uncertain times, needs to be a bit of an enforcer. So Mr. Obama's problem may just be that he's TOO nice."

FixedAngle said, "I do have to wonder about Obama's advisers. Are they giving him bad advice or is he ignoring good advice? A ten-year-old could have predicted this scheduling dust up."

YoYall said, "It's time for a parliamentary system in America, where the leader of the country is usually the leader of the majority in government. Then we might get some things accomplished. We are too immature as a nation to work out differences by finding middle ground and compromising the way Obama is trying to govern."

WidgetSmith said, "It ain't easy taking over after the worst president America has seen in decades who put the U.S. in serious debt, thereby severely limiting the room for action when later the financial crisis hit, followed by unemployment. Obama has had a really tough job straight from the beginning. I wish him success."

ACEPAPERMAN said, "I think it is still too early. He may be a lot smarter than you think he is. He doesn't have Roosevelt's overwhelming majority in Congress, so everything is a battle. You might do well to remember Clinton and his health care humiliation during his first term. It was during the second term he really started to catch fire. I believe it takes more time for any executive to have a significant impact on a society as complex as this one, so watch after 2012 and see if your criticisms are valid."

hendrix1 said, "I can't believe I'll probably have to pick between Obama and Rick Perry. ... How freaking pathetic."

zodnick said, "I couldn't disagree more with Mr. Martin. Just the possibility of having Obama for four more years scares the hell out of me!"

buger said, "I would rather have President Obama any time over the last President. I think we already had a president who scared people: W."

A field guide to the geeks of Dragon*Con

In celebration of Dragon*Con's 25th anniversary in Atlanta, Geek Out offered a guide to fan genres in the "untamed wilds of geekdom." With true geek attention to detail, some CNN.com readers added to the list.

Creatorus cosplensi said, "Notably missing here are the set known as 'cosplayers.' From the ubiquitous 501st to creators of costumes from obscure anime and manga, all cosplayers devote many hours to crafting their looks. Cosplayers are the face of geekdom, the ones who get all the photos because of their spectacular work."

Jason said, "There is a large group of geeks that the author missed. The 'old geeks' who long for the days of yore when geekdom was simpler and the media was much better: 'Sci-fi is fantasy garbage; Asimov wrote science fiction; there's a difference!' 'The game has a 4th Edition now? First edition is still the best!' and 'Those movies weren't even close to the books. Have you read the Silmarillion?!' would be typical comments from this crowd."

At least seven protesters were shot dead by Sudanese security forces on Monday during anti-coup rallies in the capi‚Ätwitter.com/i/web/status/1‚Ä¶LZ
cnni

4:31 pm ET January 17, 2022 RETWEET
A man has been arrested and charged with a hate crime after an alleged attack on a taxi driver at New York City's J‚Ätwitter.com/i/web/status/1‚Ä¶3O
cnni

3:31 pm ET January 17, 2022 RETWEET
If you can believe it -- MORE winter weather could impact the same spots later this week, that got hit Monday and t‚Ätwitter.com/i/web/status/1‚Ä¶0P
CNNweather

3:21 pm ET January 17, 2022 RETWEET
The colossal 180 million-year-old fossilized remains of an ichthyosaur have been found in the UK, in what researche‚Ätwitter.com/i/web/status/1‚Ä¶ru
cnni