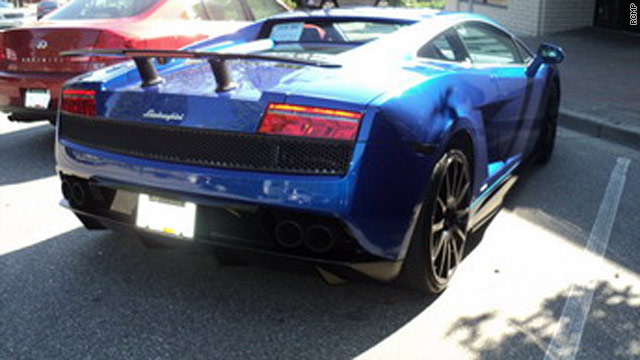 This Lamborghini was among 13 high-end cars impounded by Canadian police.
September 2nd, 2011
08:55 AM ET

Police grab $2 million worth of cars after Canadian street race

Police in British Columbia say they impounded $2 million worth of high-end vehicles this week after witnesses reported the 13 cars racing on a metro Vancouver highway at speeds of 125 mph (200 kph).

The high-end race cars included a Ferrari, Lamborghinis, Maseratis, an Audi, an Aston Martin, Nissans and a Mercedes, according to a Royal Canadian Mounted Police press release.

Two of the racers would run side-by-side to block other traffic going in their direction on the highway while the others cars would take off in a race, witnesses told the RCMP.

"These drivers seemed to be looking for attention. Well, they definitely got the attention of police," Cpl. Holly Marks, spokesperson for the Lower Mainland District Regional Police Service, said in the press release.

What the racers, who police said are all under age 21, won't get is harsh punishment.

"Each driver will be charged with Driving without Reasonable Consideration and receive a violation ticket with a specified penalty of $196. Additionally, these drivers will be responsible for all associated towing and storage charges," according to the RCMP press release.

That's because police didn't actually catch them in the act and acted only on witness accounts. They weren't caught on radar, video or seen by a police officer, Superintendent Norm Gaumont, RCMP officer in charge of traffic enforcement for the Lower Mainland, told the Surrey Now newspaper.

"I know there's a lot of disappointment, wondering why we only charged them with an offence of $196. They fact of the matter is, we have to look at all the evidence we have and what we're able to prove," Surrey Now quoted Gaumont as saying. "That's why we've charged them with driving without due consideration for the public."

If police were able to charge the 13 drivers with more severe offenses, they could have faced forfeiture of their vehicles, according to a Vancouver Sun report.

The RCMP said most of the drivers were operating their vehicles on "N" class licenses, which means they had not yet attained full driving privileges. Only one of the drivers was the registered owner of the car they were driving, Gaumont told Surrey Now.

The drivers included 12 men and one woman, according to Surrey Now. Gaumont told the paper they were on their way to have a meal when they decided to race.

According to the Sun, the vehicles were:

Thousands of Haitian migrants have appeared at the US-Mexico border seeking to cross the Rio Grande and find refugeâ€twitter.com/i/web/status/1â€¦EA
cnni

8:10 pm ET September 22, 2021 RETWEET
JUST IN: The US Food and Drug Administration has OK'd a booster dose of Pfizer's Covid-19 vaccine for certain adultâ€twitter.com/i/web/status/1â€¦fI
cnni

7:47 pm ET September 22, 2021 RETWEET
A group of bipartisan US lawmakers is dedicated to getting a new memorial to honor military veterans of the globalâ€twitter.com/i/web/status/1â€¦fw
cnni

7:35 pm ET September 22, 2021 RETWEET
James Mattis, the former US Secretary of Defense and onetime Theranos board member, recounted how he lost confidencâ€twitter.com/i/web/status/1â€¦Xq
cnni