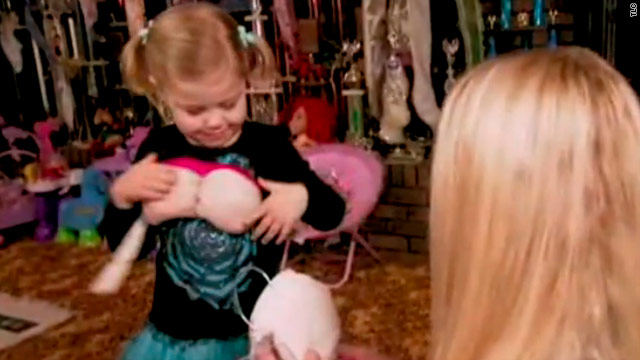 In an episode of TLC's "Toddlers and Tiaras" Maddy Jackson uses a padded bra for her Dolly Parton outfit.
September 2nd, 2011
12:22 PM ET

Toddler does Dolly: Where's the line between dress-up, hyper-sexualization?

TLC's "Toddlers and Tiaras" has no doubt been the subject of massive verbal barbs from viewers and online users when it comes to the way young females are being portrayed on the show.

It started with spray tanning and slightly edgy outfits. But the outrage is growing as the latest round of debate is making many people's heads spin. The latest call for action centers on a mother's decision to allow her 4-year-old child to wear fake padded breasts and padding on her behind in an attempt to play out the role of Dolly Parton on the show.

"This makes me want to puke," one Twitter user wrote.

The "Toddlers and Tiaras" flap is the latest in a seemingly endless line of stories about the level of appropriateness when it comes to how young girls should be dressing and how companies are marketing to them. There was the breastfeeding children's doll that caused uproar. There was the 10-year-old star of an editorial in Vogue Paris that also caused a media firestorm because of her suggestive photo shoot. Then there was the lingerie line made for young girls that made people's jaws drop.

Now people are asking, "What exactly is going on with the pervasive need to over sexualize children?"

Has there been a change in culture and our perception of what's acceptable? Or is it just a case of how far can you push the envelope?

Where do you draw the line in the sand?

For many people, it seems that line is with Maddy Jackson, 4, and her extra padding on TLC.

"I wanna show the judges how beautiful I am," the toddler says as she discusses her outfit with her mother.

They select a dress, one that's modeled after Dolly Parton. (One could question whether the debate alone should be whether a 4-year-old should even be trying to mimic Parton, but that's a debate for another day, because it went further than that.)

To fully take on the role of Parton, Maddy needed a little help from some friends. But not the kind many people were expecting.

"This goes like that," the girl says as her teeny hands hold up a padded C-cup bra to her chest, gesturing to her mother to make sure she had the idea right.

The 4-year-old's mother explains the outfit is one she, too, wore when she competed in pageants.

“When she wears the fake boobs and fake butt, it’s an added, extra bonus," Linda Jackson tells the cameras. "It’s really funny when she comes out onstage. Everyone thinks it’s hysterical. All of a sudden, they realize that not only is she Dolly, but she has the enhancements just like Dolly.”

But for a 4-year-old? Her stylist on the show seemed to not be keen on the idea. And perhaps little Maddy herself got the feeling others disagreed with the choice of enhancements. At one point another 4-year-old asks her "What is that?" as she points at Maddy's chest. In what appears to be a moment of embarrassment, the pageant star covers her chest.

The decision is one that the toddler's mom has been defending even as outrage has spread on Twitter and on the show's Facebook page.

Her mother even went on the "Today" show to try to explain why she thought the outfit and enhancements weren't as big of a deal as everyone was making it out to be.

"With anything, people are gonna think things are over-the-top,” Lindsay Jackson said. “To some people, it’s over-the-top. To us, it’s just what happens. It’s normal.”

Just what is normal these days?

On the show's Facebook page it seemed the answer was wholeheartedly that the enhancements are unequivocally not normal.

"Isn't this child pornography or something?" Buffy Smith wrote.

"It is extremely disturbing the things these parents are allowing their children to wear. Where is child protective services when you need them? Enhancements? Really?" Marion A Vail Pollak added.

You get the idea of how the rest of the comments followed. Some of them are so harsh, they're not fit to print here.

The show did have a few folks come to their rescue saying they were fine with it.

"I don’t see what the big deal is it’s like a Halloween costume," Kayla Niziolek wrote on the show's Facebook page. "And if the mom wants her daughter to dress up like that and the daughter doesn’t mind, who cares who is it hurting? If you want to complain about it then don’t watch it you dont have to!"

Debbie Watts agreed that she had no problem with the enhancements for a Halloween costume, saying it would be deemed "cute" if it was the holiday season.

However, she did have a problem with the overall nature of the idea.

"I do have a problem with the disrespectful way these children are being raised," Watts wrote. "I shudder to think what these children will be like towards their parents when in their teens."

For others, the response was more seething. There were numerous calls for Child Protective Services to step in.

And in one case, there was an argument about other authorities getting involved.

"Disgusting," Sandra Fincher-Rauhe wrote on the Facebook page. "These parents need to be sent to jail."