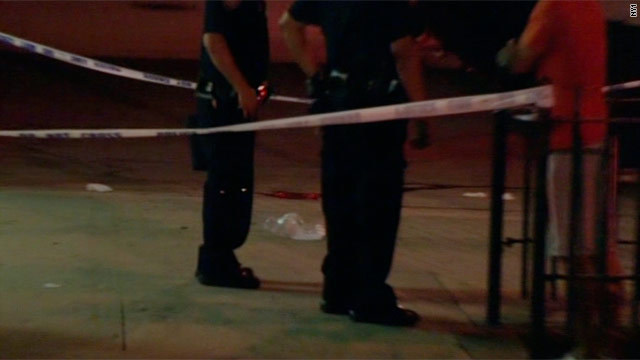 48 NYC shootings in a weekend: Trend or random tragedy?

It was a very bloody Labor Day weekend in New York. Forty-eight people were shot, including two law enforcement officers and a woman who was sitting with her daughter on a Brooklyn building stoop. The officers survived; three people have died.

The high number of shootings has captured headlines and led some to wonder whether there's some specific explanation for the violence.

Mayor Michael Bloomberg says there is, and he said Tuesday that lawmakers in the nation's capital ought to do something to better control gun violence. New York state reportedly had some of the strictest gun laws in the country, but Bloomberg wants Washington's help. He spoke outside a hospital where the officers were being treated.

"This is a national problem requiring national leadership," he said, according to the Los Angeles Times. "But at the moment, neither end of Pennsylvania Avenue has the courage to take basic steps that would save lives."

Jon M. Shane, an assistant professor at one of America's most highly regarded policing think tanks, the John Jay College of Criminal Justice in New York, cautioned against drawing any conclusions from the numbers alone. Shane spent 20 years with the police department in Newark, New Jersey, which has consistently ranked as one of the most violent cities in the United States.

"I would caution against chalking this up to violence that is going to happen over any holiday weekend," Shane said, adding that thorough analysis of each Labor Day weekend shooting should be done to extrapolate concrete explanations that go beyond the particulars of each incident. One would need to research possible motives in each case and investigate suspects' backgrounds and their possible criminal affiliations. Previous crimes at the locations should be weighed from every angle.

In short, 48 shootings sounds like a lot, but drawing any large conclusions, or linking them to a larger trend, will take time.

The woman and the officers were shot Monday hours after the West Indian American Day Parade ended in Crown Heights, Brooklyn. According to the New York Post, two men were "slap boxing" before a shootout in which police became involved. In all, nine people in the area of the parade were shot.

The weekend's bloodshed put a fine point on figures the FBI released in May showing that violent crime was down throughout the country in the past year but up in New York. The New York Police Department released its own report in January, available in full here (PDF), which visually lays out all of the city's 536 homicides in 2010.

7:30 am ET August 13, 2022 RETWEET
Climate change has already doubled the chances of a disastrous flood happening in California in the next four decad‚Ätwitter.com/i/web/status/1‚Ä¶fj
cnni

7:11 am ET August 13, 2022 RETWEET
A man rescued from the rubble of a collapsed tunnel in Rome has been accused of digging it as part of an elaborate‚Ätwitter.com/i/web/status/1‚Ä¶e7
cnni

6:29 am ET August 13, 2022 RETWEET
One person has died and 17 have been injured after a stage collapsed at a music festival near Valencia, Spain, acco‚Ätwitter.com/i/web/status/1‚Ä¶T0
cnni

7:30 am ET August 13, 2022 RETWEET
Climate change has already doubled the chances of a disastrous flood happening in California in the next four decad‚Ätwitter.com/i/web/status/1‚Ä¶fj
cnni

7:11 am ET August 13, 2022 RETWEET
A man rescued from the rubble of a collapsed tunnel in Rome has been accused of digging it as part of an elaborate‚Ätwitter.com/i/web/status/1‚Ä¶e7
cnni

6:29 am ET August 13, 2022 RETWEET
One person has died and 17 have been injured after a stage collapsed at a music festival near Valencia, Spain, acco‚Ätwitter.com/i/web/status/1‚Ä¶T0
cnni