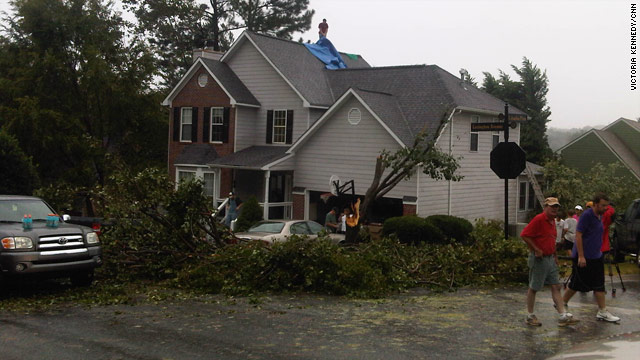 In Gwinnett County, Georgia, just outside Atlanta, firefighters said Tuesday they found the body of a man who drowned in a rain-swollen creek near Norcross. He was one of two men who were trying to walk across the creek Monday "when a sudden gush of rushing water swept them over into the middle of the creek," the Gwinnett Fire Department said.

The creek was estimated to be 8 to 10 feet deep near the spillway where the two were swept away. The first man held onto the second but eventually lost his grip. He was washed downstream as well but managed to escape the water.

In Baldwin County, Alabama, police said they no longer believe a missing 16-year-old boy is alive. The teen was last seen on a beach near Gulf Shores on Sunday, said sheriff's spokesman Maj. Anthony Lowery. Lowery said Tuesday hopes of him coming to shore have faded.

A flooding death was also reported in rural northeast Mississippi, where one person drowned after floodwaters swept away a vehicle in Tishomingo County, emergency officials said.

In addition, a woman died in Chattanooga, Tennessee, early Tuesday. A woman went outside about 12:30 a.m. to move her vehicle and was struck by a tree, said police Sgt. Jerri Weary. About 30,000 people in the area were without power as of Tuesday morning, Weary said, and several roads were closed because of flooding.

As of 5 p.m. ET, the center of what remained of former Tropical Storm Lee was located about 115 miles northwest of Atlanta and was nearly stationary, the National Weather Service's Hydrometeorological Prediction Center said Tuesday.

Winds of up to 30 mph may accompany the rain.

[12:18 p.m. ET] Lee is now a post-tropical cyclone, but its remnants still pose a significant threat as they move up the Appalachians into the Northeast.

Flash flood watches, flood watches and flood advisories were in place from the Gulf Coast northward into New England on Tuesday, the National Weather Service said.

Rainfall of 4 to 8 inches with isolated areas of 10 inches was in the forecast from the Tennessee Valley into the central Appalachians on Tuesday, forecasters said. Winds of 30 mph may accompany the rain.

The new rainfall comes just a week after Hurricane Irene brought high winds and torrential rains to the Northeast, washing out bridges and cutting off towns in Vermont.

In Burlington, Vermont, on Monday, water flooded streets up to people's knees as they waded through, CNN affiliate NECN reported. More than 2.5 inches of rain was recorded at Burlington's airport, the National Weather Service said.

Rainfall totals in other states hit by Irene - New York, New Hampshire, New Jersey, Pennsylvania, Maryland and Virginia - had topped 3 inches in some places, with more on the way.

Meanwhile, areas from Louisiana into Tennessee might take a while to dry out.

Lee and its remnants dumped 15.43 inches of rain on Holden, Louisiana; 13.45 inches on Florence, Mississippi; 11.74 inches on Tillman's Corner, Alabama; 10 inches on Milton, Florida; and 12.22 inches on Cleveland, Tennessee, through 8 a.m. ET on Tuesday.

"We heard a big rumble, and we went out and the house was ripped in half," Chris Turner, of Woodstock, Georgia, told WSB.

Firefighters recovered the body of a man swept away in a swollen creek in Gwinnett County, Georgia, WSB reported. The station said he and another man fell while walking across a Peachtree Creek spillway. Firefighters said one man got out and tried to rescue his friend but lost his grip, WSB reported.

In Cleveland, Tennessee, floodwaters got into downtown businesses and forced the evacuation of some apartments, CNN affiliate WDEF-TV reported. The storm also knocked out power to 5,100 customers, the station said.

In Jefferson County, Alabama, the roof over the performing arts center at Pinson Valley High School collapsed Monday in the wind and rain. The school was closed Tuesday, as were Birmingham City Schools and Mountain Brook City Schools, among others, CNN affiliates WBRC-TV and WVTM-TV reported.

In North Carolina, more than 3,500 customers were without power Tuesday morning because of the storm, CNN affiliate WCNC-TV reported.

A woman in her late 60s who suffers from dementia was lost in the woods until this furry hero saved herâ€twitter.com/i/web/status/1â€¦RF
cnni

12:16 pm ET May 18, 2022 RETWEET
Russian gymnast Ivan Kuliak, who received criticism outside of Russia for wearing a pro-war symbol on a podium nextâ€twitter.com/i/web/status/1â€¦PK
cnni

A woman in her late 60s who suffers from dementia was lost in the woods until this furry hero saved herâ€twitter.com/i/web/status/1â€¦RF
cnni

12:16 pm ET May 18, 2022 RETWEET
Russian gymnast Ivan Kuliak, who received criticism outside of Russia for wearing a pro-war symbol on a podium nextâ€twitter.com/i/web/status/1â€¦PK
cnni