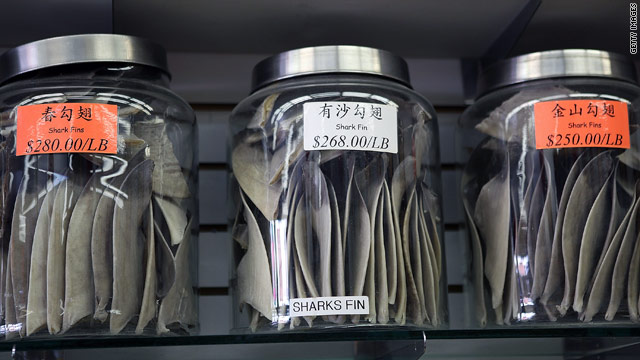 Shark fins may be pulled from the shelves of San Francisco's Chinatown if Gov. Jerry Brown signs a bill banning their sale.
September 6th, 2011
10:56 PM ET

Shark fin soup one step closer to being banned in California

A Chinese delicacy moved closer to extinction Tuesday in California as the state Senate passed a bill banning the sale of shark fins.

The Senate voted 25 to 9 to ban the possession, sale or trade of the key ingredient in shark fin soup. The bill will go to Gov. Jerry Brown's desk for approval.

Shark fins are often acquired through the controversial practice of finning, in which a shark's fins are cut off and the rest of its body is tossed into the ocean. California, home to 1.1 million Chinese-Americans, is one of the largest importers of shark fins outside Asia.

Supporters of the bill hailed the vote as an important step toward protecting an increasingly rare species.

"This hugely important victory in the California Legislature comes not a moment too soon," said Leila Monroe, staff attorney with the Natural Resources Defense Council.

"With sharks being killed by the tens of millions every year just for their fins, scientists, many Asian Pacific-American leaders and jurisdictions around the country and world agree: The very best way to protect sharks from disappearing from our oceans forever is to ban the sale and trade of shark fins."

Critics said the bill unfairly targeted the Chinese-American community because it only restricts the sale of shark fins, which are used almost exclusively in Chinese cuisine. The bill does not apply to other shark products like oil or meat.

"I think what is most insidious about this particular bill is that it sends a very bad message, not only to us in California but to the rest of the world, that discrimination against Chinese-Americans is OK," Sen. Leland Yee, D-San Francisco, said, according to the San Francisco Chronicle.

Lawmakers on Tuesday also approved a second bill that added several key provisions, including an exemption for taxidermists to possess shark fins and giving restaurants more time to use up what they have of the ingredient, the Los Angeles Times reported.

It is unclear what position Brown might take. He has not publicly stated whether he supports the bill.