As the sun set on an airport hotel parking lot in Austin, Texas, Roger Cosby needed to tell his story.

He had just witnessed a sight that many Texans are battling - a devastating wildfire.

The state's largest blaze, a massive, uncontained fire in Bastrop County near Austin, has scorched some 25,000 acres, destroyed at least 470 homes and forced about 5,000 residents to evacuate.

That wildfire on Sunday was near the house Cosby shares with his companion of nine years, Cindy Boyd.

Cosby was taking a nap, while Boyd was working in their shop, making decorative plates.

The Bastrop home that Boyd has lived in for 26 years was on fire.

Cosby says quickly jumped into their car with a few belongings and sped down a long driveway with flames surrounding them on both sides.

"It was like opening the door of an oven," Cosby says.

He says he fears they have lost everything: the house, a workshop, a greenhouse, a truck and worst of all - six acres of trees surrounding the house. 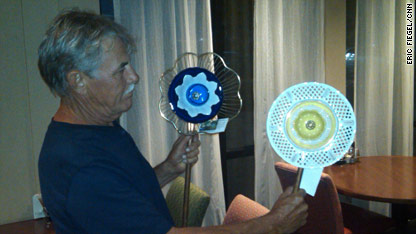 Roger Cosby holds decorative plates, some of the few possessions he was able to salvage.

"It was Cindy's forest," says Cosby, standing next to their getaway car.

He says they hope to return to the house on Tuesday for the first time since the fire to see if anything survived.

"It's all gone. There is no way anything could be left," Cosby struggles to say.

Boyd's forest is now likely a scorched, version of the area she loved so much. They assume charred limbs are all that remain.

Cosby says they have no plans to rebuild on the land they love so much because they believe it will never be the same.