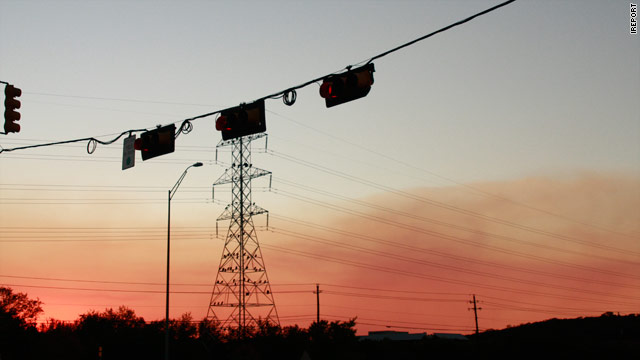 An iReporter captures an intersection in an Austin neighborhood.
September 7th, 2011
06:51 AM ET

Wildfires raged across Texas early Wednesday as they have each of the last 295 days, charring nearly 120,000 acres in the last week alone.
"I cannot emphasize enough to Texans in the impacted areas the importance of heeding all warnings from local officials, especially evacuation orders, as these fires are mean, swift and highly dangerous," Gov. Rick Perry said. The largest fire, near Austin, has spread across 33,000 acres, claiming two lives and forcing the evacuations of at least 5,000 people.

Another person has died from the shooting rampage that occurred Tuesday at an IHOP near Carson City, Nevada, officials said early Wednesday. A gunman carrying a variant of an AK-47 rifle opened fire on uniformed Nevada National Guard members as they were having breakfast. In all, 11 people were shot, and the gunman turned his weapon on himself.

There's more from the Amanda Knox hearing in Italy. On Wednesday, a forensic expert testified that DNA on the knife used to kill British student Meredith Kercher could not have been from blood. Carlo Torre, one of Italy's best-known forensics experts, presented a detailed technical argument about the DNA on the knife as Knox appeals her 2009 conviction for the murder of her housemate. Prosecutors contend there were traces of Knox's genetic material on the handle and Kercher's in a tiny groove on the blade. Kercher's semi-naked body was found in the house that she and Knox shared in Perugia, Italy. For complete coverage of the Knox case, click here.