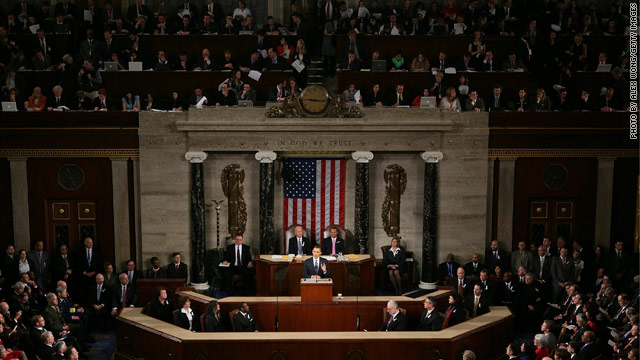 “So Plan B is the failed Plan A? Awesome.” - Expresss

“The president could be announcing the cure for cancer and the GOP would vote against it.” - bloodawg

President Obama is set to unveil a $300 billion jobs program in his Thursday speech to Congress that will focus on new infrastructure spending and targeted tax cuts. The president is also expected to renew his push for stalled trade deals with Panama, Colombia, and South Korea, but GOP critics say the plan represents a continuation of what they consider to be failed policies.

CNN.com readers were obviously divided about President Obama’s program. Many said it’s just more rhetoric, while others said the president still isn’t being given a chance.

akjonny665 said, “This is like a band-aid for a shotgun wound, they don't even look at other solutions. Importing too many goods, exporting our jobs. NAFTA should have been scrapped, [for example].”

BinaryTruth responded, “’What exactly can he do?’ If corporate America is incapable, unpatriotic enough, and entirely unwilling to hire American workers – then props to Obama for actually caring enough to do so.”

Ramsglen said, “How dumb is the guy. He knows the American people are not going to let him BLOW another 300 Billion. He has a track record of just letting it disappear. Obama Must Go."

sharky66 said, “Oh don't worry, if Congress does not agree to this, and most likely they will not, Obama will just issue yet another Executive order, go around Congress, and put everything into play.”

CB5 said, “Wow, $300 billion MORE to his Big Labor Union Supporters to bribe them into getting out and start campaigning for him... Republicans are fools if they go along with this at all! It is nothing but more favors being handed out to his buddies at our expense, AGAIN! Vote Obama out in 2012!”

Guest said, “Hey, just so you know the 300 billion he plans on enacting 170 billion in tax cuts like the payroll tax cuts, tax cuts for those who hire the unemployed. If it came out of a Republican’s mouth you would be clapping.”

mcdiarcr said, “Regardless of the party making the statement – over spending has cost us jobs and is now threatening our ability to compete globally with a poorer rating than other countries. Do you honestly believe spending more money has ever helped anyone get our of debt? "

JustTruth1 responded, “'..over spending has cost us jobs and is now threatening our ability to compete globally..' True – those two unfunded Bush wars and his unfunded prescription plan, not to mention the decade+ of forgone income from his tax breaks or the expenses associated with his economic crash, cost this country almost half of what you see sitting there in our big deficit pool.”

JRoth420 said, “Sometimes spending DOES help you get out of debt. If you own a business, and take a loan so that you can invest more money in your business (even though you are already in debt) and it helps turn your business profitable... Well that is debt and spending that helps you get out of debt. That's the whole point here... JUMP STARTING the economy again. Do I think the government should be doing it? No. But the vaunted "private sector" sure doesn't seem to be doing a darn thing to help at this point. So what's the plan? Just wait longer?”

COULROPHILE said, "’I still believe both parties can work together to solve our problems.’ Really? Oh Obama, you put too much faith in the Republicans. Besides, infrastructure is intended to serve everybody, not just the wealthy, and we know that the Republicans don't care for the majority of the populace."

Romney lays out his own plan

Two days before President Obama will present his job program to a joint session of Congress, GOP Presidential candidate Mitt Romney presented his own plan and says Obama "doesn't have a clue" about what to do for the economy. He says his plan will create more than 11 million jobs.
Most CNN.com readers weren’t inspired by Romney’s plan.

KDM said, “Why does anyone need a jobs plan? I thought those big tax cuts for the rich created all the jobs."

sameeker said, “HEY REPUGS! How long will it take you to figure out that trickle down does not work? The rest of the world has a 25% corporate tax rate; however, corporation there pay all of that 25%. Over here, they use loopholes and pay nothing, while getting all sorts of subsidies and corporate welfare.”

Publius13 said, “Romney's ‘plan’ is no different from any of the other GOP ‘plans.’ 1) kill healthcare; 2) reduce taxes (further); 3) reduce regulations; 4) increase domestic energy production; and 5) repeal Sarbanes-Oxley and Dodd-Frank. He adds a sixth point, which essentially is ‘rename everything after Reagan.’ None of these things will create jobs, because all are intended to stimulate supply. The problem is a lack of demand, not a lack of supply fellas. You can keep pushing that wet noodle of tax reduction until it goes to zero, but it ain't gonna make any new jobs. Meanwhile, the proposals to reduce regulation and repeal S-O and D-F will only free up the Wall Streeters to pay themselves more ill-gotten money drive the economy back into the ditch.”

camty said, “Anyone notice how none of the GOP candidates mentioned anything about jobs or a jobs plan until Obama announced he was going to outline his jobs proposal? Now, they are all against Obama's plan (not yet announced) and have plans of their own."

mistawest responded, “Romney has had his jobs plan scheduled for a while now and unlike OBAMA's, it's an ACTUAL plan!"

tmcsr69 said, “If you would bother to listen to the candidates, you would hear plenty of ideas.”

CrunkSwaggaG said, “The words ‘Romney’ and ‘Jobs’ should not be used in the same sentence. Massachusetts ranked 47th in the nation in job growth during his tenure and his ‘private sector experience’ involved killing American jobs, shipping them overseas, & stuffing his own pockets. His lousy record speaks for itself.”

mooseman316 said, “Why do the Republicans scream for a jobs plan from the President and Congress, but continually state that the government cannot create jobs. Is this the age of DoubleSpeak?”

bzscorpio said, “It's so funny that Republicans are pushing so hard for deregulation. We tried that during the Bush Administration and it, more than anything else, is the biggest reason our economy is in the mess it's in now. When you tell people with money that they can do whatever they want to acquire more of it, it typically doesn't bode well for the people who don't have money (i.e.-the middle class). “

When Wolf Blitzer sat down with Former Vice President Dick Cheney he asked him if he had any regrets and Cheney said he had none. According to Blitzer he was “vintage Cheney.”

If CNN.com readers’ comments are any indication, Americans are not remembering the vice president well—putting it mildly.

John said, “Dick Cheney is a pure jack-ass. I worked for 15 years as an exec close to him before he was vice-pres and I'm here to tell you that the day it was determined he would actually assume that office, a good deal of people in the same arena with me all broke out in a sweat. If you had been exposed to what we had witnessed over the years, you'd have felt faint as well.

You had better believe that he played a major role in the deception to start the ball rolling in Iraq and although we have no proof, we also feel certain that he had his hands deep into the derivatives scandal that nearly broke the back of this country's financial stability. Both events bear the telltale mark of this man's well-recognized strategy and principles. I'll end by saying that the timing specific to the end of his term in office was a blessing in more ways than can be imagined by the American people.”

Justice said, “Generations to come will have a hard time believing that such a monster ever existed in flesh.”

Caïro said, “Of course he has no regrets. We have.”

But there were a few Cheney defenders.

Trey said, “I used to think they (W and Cheney) needed to be brought up on war criminal charges. That was until I read a book titled "Courting Disaster" by Mark Thiessen (sp?). I went in with an open mind and am convinced that what they did was right for the country now. Please get informed before you spout such hate-filled speech.”

Denis Egan said, “I found Cheney's long career admirable. I consider him to be clear, consistent and refreshingly frank and unpolitical. If anyone wishes to defame him, he answers them simply without any display of the hateful contempt which flows so easily in today's world.”

But Tim responded, “’I found Cheney's long career admirable. I consider him to be clear, consistent and refreshingly frank and unpolitical.’ Yeah, like that time he outed a CIA agent exposing her undercover operations and contacts in retaliation for her husband not upholding his lies used to get us into the war in Iraq..... he was clear, consistent, refreshingly frank, and most of all completely ‘unpolitical.’"

Jimjim said, “You really haven't been paying attention to his career. Cheney has been the consummate politician dating back to his days working as part of Nixon's criminal administration. The anti-Cheney hate you deride is the natural consequence of examining a life of a man who holds democracy in contempt and the rule of law as antiquated. He is known as vindictive, dishonest and corrupt for a reason – because that is the legacy his acts support.”