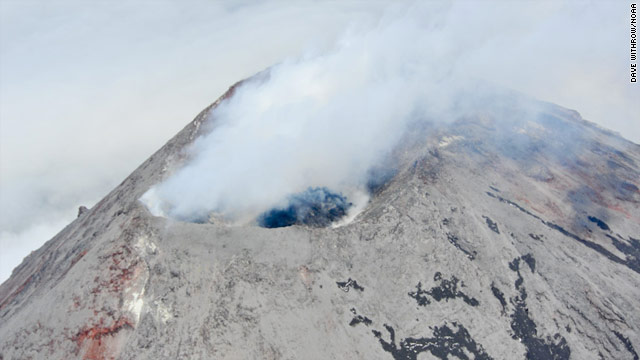 Alaska's Cleveland Volcano could soon be leaking from its flanks if the lava inside continues to build up, officials at the Alaska Volcano Observatory reported.

The observatory reported that the volcano's lava dome was 262 feet in diameter on August 30 and has now expanded to 394 feet.

"The presence of the lava dome increases the possibility of an explosive eruption, but does not necessarily indicate that one will occur," the observatory said. "Short-lived explosions could produce an ash cloud that exceeds 20,000 ft above sea level."

The observatory said it did not expect air travel problems if the volcano erupted.

Because "the small lava dome in the summit crater has resumed growth and now fills the floor of the crater," the observatory is raising its alert level.

The remote volcano is in the Aleutian Islands, about 940 miles southwest of Anchorage.

Because the volcano is in such a remote area, the observatory webcam feed has experienced technical difficulties. But you can still check the webcam here.

Watch the moment a woman was rescued from a car in China floodwaters after Typhoon Chaba. cnn.it/3affiPO
CNNweather

11:45 am ET July 6, 2022 RETWEET
The Great Salt Lake dropped to 4,190 feet on Sunday, the lake‚Äôs lowest level on record, according to¬†data from thtwitter.com/i/web/status/1‚Ä¶NLLE9
CNNweather

10:15 am ET July 6, 2022 RETWEET
Carlos Santana was "over-taken by heat exhaustion and dehydration," according to a¬†statement by his management team‚twitter.com/i/web/status/1‚Ä¶DoW
CNNweather

12:41 am ET July 6, 2022 RETWEET
7. 7 people. 7 people dead. They just wanted to enjoy time with family. Celebrate like we used to before covid. And‚Ätwitter.com/i/web/status/1‚Ä¶hr
sarasidnerCNN