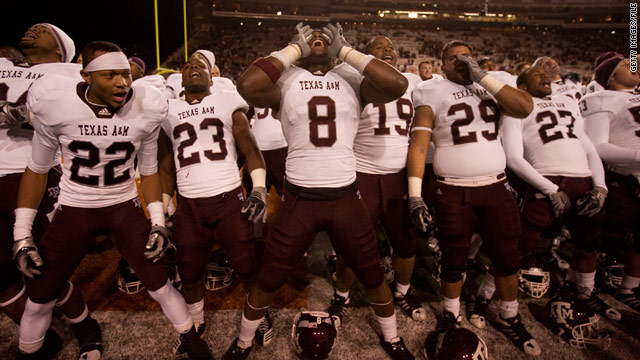 Aggies celebrate their win over the rival Texas Longhorns last year. It's unclear if they can yet celebrate a move to the SEC.
September 7th, 2011
03:17 PM ET

The votes are in, but it appears there is still at least one hurdle in Texas A&M University's lengthy endeavor to join the Southeastern Conference.

The school said a week ago that on June 30 it will would vacate the Big 12 Conference, of which it has been a member since before the 1996-97 season. There was rampant speculation that the Aggies would join the powerhouse SEC, but President R. Bowen Loftin last week said only that he hoped the exit process was "as amicable and prompt as possible."

On Wednesday, the president issued a statement saying he was pleased the SEC presidents and chancellors voted Tuesday night to accept A&M as their 13th team.

"However, this acceptance is conditional, and we are disappointed in the threats made by one of the Big 12 member institutions to coerce Texas A&M into staying in the Big 12 Conference," Loftin wrote. "These actions go against the commitment that was made by this university and the Big 12 on September 2. We are working diligently to resolve any and all issues as outlined by the SEC."

Seems like the process will be neither prompt nor amicable.

Sports Illustrated is reporting that fellow Big 12 member Baylor University is threatening legal action, temporarily delaying the move, which is contingent on each Big 12 team waiving its right to a legal challenge.

The conference's members had agreed not to sue over the move, but a source told the magazine that Baylor broke ranks. In a statement, University of Florida President Bernie Machen, chair of the SEC presidents group, said the conference would not accept the Aggies until the legal issues were resolved, according to Sports Illustrated.

"The SEC has stated that to consider an institution for membership, there must be no contractual hindrances to its departure," Machen said. "The SEC voted unanimously to accept Texas A&M University as a member upon receiving acceptable reconfirmation that the Big 12 and its members have reaffirmed the letter dated September 2, 2011."

On that date, Big 12 Commissioner Dan Beebe wrote SEC Commissioner Mike Slive to say Big 12 members had agreed not to take legal action against the SEC so long as the conference publicly announced A&M's admission by Thursday at 6 p.m. ET

"It is in the best interests of each of our conferences and our member institutions of higher education to waive any and all legal actions by either conference and its members resulting from admission of Texas A&M into the SEC, as long as such admission is confirmed publicly by September 8, 2011," the letter said. (Read the entire letter as a pdf)

An undated statement on Baylor's website slams the proposed move by Texas A&M and casts it as a bane on Texas' rich football history. From pee wee football to Friday Night Lights to the proud college traditions of Texas, Texas A&M and Texas Tech to the NFL's Dallas Cowboys and Houston Texas, "football in Texas is more than a passing interest, it is a part of the fabric of this great state," goes the statement.
It also asserts that the departure of Texas A&M, and possibly other Big 12 schools, threatens 100-year-old rivalries, as well as the ability of Texas schools to recruit premier student athletes. The statement also mentions educational concerns: "Will Texans watch as our most precious resources — the great minds of the next generation — are exported to new conference institutions?"

It calls on Texans to implore university leaders "to stop this madness that will lead to the dissolution of the Big 12 and the end of an era for Texas."

"Texans must stand up and call the leadership of the University of Texas, Texas A&M and Texas Tech to clear-headed thinking about the state's future. Texas' flagship institutions of higher learning are the guardians of the state's future — their loyalties must first be to Texas and to her citizens," the statement reads.

If Texas A&M were to join the SEC, it would join arguably the best college football conference in the land. The Auburn Tigers, Alabama Crimson Tide and Louisiana State Tigers have all won the BCS National Championship in the past five years, and the Florida Gators have won it twice in that time.

Though the Aggies haven't won a football championship in more than seven decades, A&M is no slouch in athletics. The school's track, softball, golf, equestrian and women's basketball teams have all won national championships in the past 25 years. Also, the football team enjoys such a fervent following that the fans are regarded as the squad's "12th Man."

There were signs Wednesday of other concerns about the Aggies' potential exodus, namely its effect on the Dallas economy and one of football's most colorful rivalries. Emboldened by A&M's potential move, one of the Big 12's most prolific members is reconsidering its commitment to the conference, CNN affiliate WFAA reported.

The Oklahoma Sooners, presently ranked the top team in the country, said last week that they had also been approached by other conferences. If Oklahoma leaves (speculation suggests the Sooners could join the Pac-12), it could put the kibosh on the Oklahoma-Texas showdown known as the Red River Rivalry.

The teams have been playing annually since 1900 and at the Cotton Bowl in Dallas since 1932, WFAA reported. The Dallas Convention and Visitors Bureau estimated that in 2007 alone the game injected more than $30 million into the local economy with $18 million of that staying in Dallas County, according to WFAA.