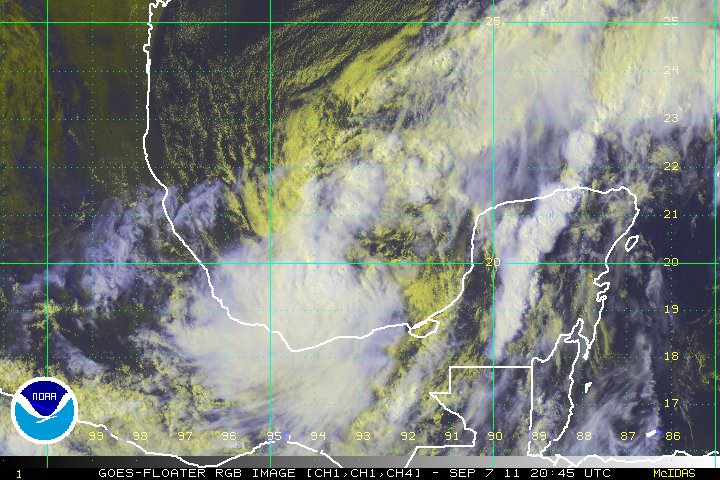 The center of Tropical Storm Nate churned in the southern Gulf of Mexico on Wednesday afternoon.
September 7th, 2011
05:34 PM ET

[Updated at 5:34 p.m. ET] Tropical Storm Nate has formed less than 150 miles from Mexico's coast in the southern Gulf of Mexico, and it could become a hurricane by Friday, the National Hurricane Center said on Wednesday afternoon.

The storm, which formed near the Bay of Campeche, is the 14th named storm of the 2011 Atlantic hurricane season, and the second to form on Wednesday. Tropical Storm Maria formed Wednesday morning in the open Atlantic Ocean.

Nate, whose center as of 5 p.m. ET was 125 miles west of Campeche, Mexico, has prompted Mexico to issue a tropical storm warning for the country's coast from Chilitepec to Celestun, according to the hurricane center.

Tropical storm conditions are expected within the warning area by Wednesday night, the center said. Already, tropical storm force winds extended up to 105 miles from the center by 5 p.m. Wednesday.

Late Wednesday afternoon, the storm's maximum sustained winds were near 45 mph. The storm is not expected to move much Wednesday and Thursday, but it could head slowly north on Friday, when it could strengthen into a hurricane, according to the hurricane center.

Nate is expected to produce 2 to 4 inches of rain in the Mexican states of Campeche, Tabasco and southern Veracruz, and storm surges may raise water levels up to 3 feet above normal tides in the warning area, the center said.

[Initial post, 11:25 a.m. ET] A tropical depression in the Atlantic has intensified to form Tropical Storm Maria, according to the National Hurricane Center.

The storm has maximum sustained winds of 50 mph (85 kmh). The storm is moving toward the west at 23 mph (37 kmh). The NHC said this same pattern of movement is expected over the next two days.

The hurricane center said there were no watches or warnings associated with Maria in effect at the time.