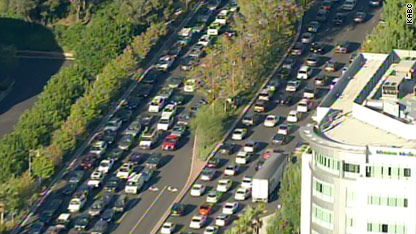 Power outages contributed to traffic jams in southern California on Thursday afternoon, including this one in Orange County.
September 8th, 2011
09:02 PM ET

[Updated at 9:02 p.m. ET] Authorities were investigating a power blackout in parts of southern California, Arizona and Mexico on Thursday that left more than 1 million customers without power and caused widespread traffic jams.

San Diego Gas & Electric said all of its 1.4 million customers were without power. The problem appeared to have originated in Arizona, the utility said.

"This caused our line from AZ and from the north of our region to both trip off," the utility posted on its Twitter account.

Power outages in California stretched from San Clemente to the state's border with Mexico on Thursday, a San Diego County spokesman told CNN.

The cause of the blackout was unclear. The San Diego utility said greater power usage during hot weather could be responsible.

After years of drought, it's not unusual for Sacramento's water to taste off. But it doesn't usually start until eaâ€twitter.com/i/web/status/1â€¦0q
CNNweather

4:37 pm ET June 22, 2021 RETWEET
Parched rainforest in the Amazon, plagued by drought and deforestation, is careening toward a destructive fire seasâ€twitter.com/i/web/status/1â€¦GZ
CNNweather

2:57 pm ET June 22, 2021 RETWEET
The deterioration of the Great Barrier Reef is prompting the UN to suggest it be listed as in 'danger,' but the Ausâ€twitter.com/i/web/status/1â€¦3A
CNNweather