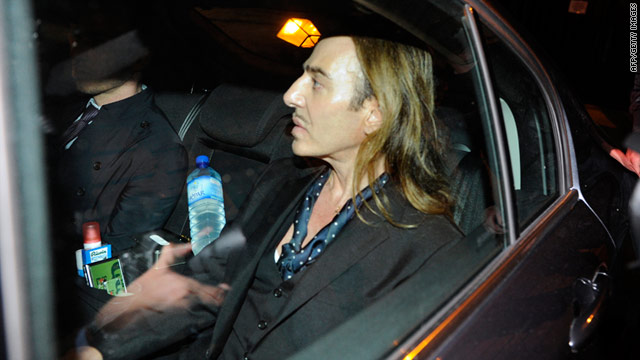 The French court gave him a suspended fine of 6,000 euros ($8,415) but he was not sentenced to jail time. The plaintiffs were awarded one symbolic euro each. Aurelien Hamelle, Galliano's lawyer, told CNN he was not surprised by the verdict.

He said the designer was happy it was all over and wants to put the whole episode behind him. Galliano was not present at the trial because he didn't want to face the media, his lawyer added.

Galliano, who was fired by fashion giant Christian Dior in March after a video surfaced showing him praising Nazi dictator Adolf Hitler, testified at the start of the trial in June that drugs were to blame.

Judge Anne-Marie Sauteraud read out a list of the abuse Galliano was accused of hurling at Geraldine Bloch and Philippe Virgitti, including obscenities mixed with remarks about their ethnic backgrounds.

"He said 'dirty whore' at least a thousand times," the judge said.

Galliano said on the witness stand that he had no memory of making the comments.

Asked to explain his "lack of memory," he said: "I have an addiction. I am currently undergoing treatment."

Galliano's attorney said before the trial began that the designer "was a sick person, who was suffering from addiction and this is something we are demonstrating through medical evidence, expert reports."

"We must not judge a man who for 30 years has been dedicated to diversity, who has been a loving person for all races, cultures and religions ... based on 40 minutes where he was sick through alcohol and medication," Hamelle said.

Galliano testified that he suffered from an increasing workload and that he had had no time to mourn after the 2007 death of his alter ego at Dior, designer Steven Robinson.

12:13 am ET October 27, 2021 RETWEET
A small group of ultra-wealthy individuals could help solve world hunger with just a fraction of their net worth, sâ€twitter.com/i/web/status/1â€¦XU
cnni

12:01 am ET October 27, 2021 RETWEET
The "Greenhouse," a zero-waste home inspired by nature, could provide a blueprint for sustainable housing of the fuâ€twitter.com/i/web/status/1â€¦xk
cnni