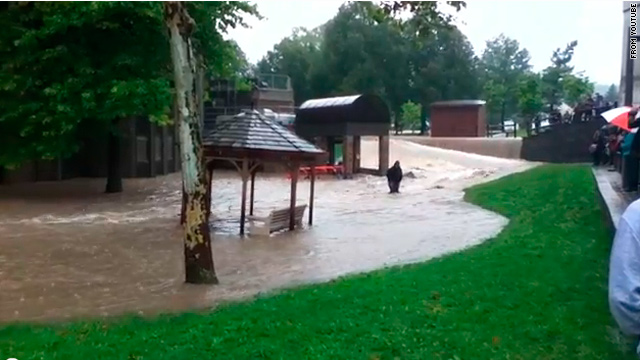 Floodwaters have canceled classes and shuttered buildings on the campus of the State University of New York in Cobleskill, New York. Video of murky water rushing fast over a concrete sidewalk showed just how serious the situation there is. There has been damage to 10 resident hall wings in five buildings as well as staff offices. Sixty students had to be relocated, according to Scott Silverstein, SUNY's director of communication.

"It's not as bad as it was yesterday," he told CNN on Thursday morning, adding that everyone is safe and accounted for on campus.

Classes were canceled Wednesday and are canceled Thursday, he said. Officials are assessing the situation for Friday, Silverstein said.

An agricultural engineering building is offline because of flooding in the basement, he said.

"Luckily, in our case, being in a college, we have a large infrastructure between our residence hall staff, our facility staff, dining services as well as faculty staff and students on campus," Silverstein said. "It's all hands on deck. We could always use more assistance."

"We can no longer use the flag to turn people away or distract them from the real issues that face our black communâ€twitter.com/i/web/status/1â€¦GG
cnni

1:01 am ET June 6, 2020 RETWEET
Laser mapping is increasing the speed and scale of archeological discoveries and has now revealed the earliest andâ€twitter.com/i/web/status/1â€¦Fp
cnni

12:03 am ET June 6, 2020 RETWEET
This pilot drew a unique tribute to George Floyd over Canada by following a flight path in the shape of a raised fiâ€twitter.com/i/web/status/1â€¦VF
cnni