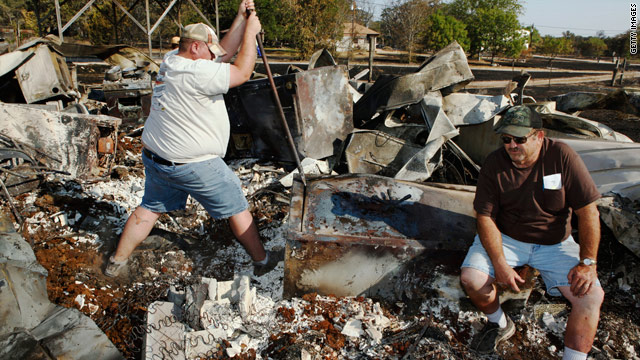 Thomas Polly tries to open a fireproof gun safe with his father at their burned home Wednesday near Bastrop, Texas.
September 8th, 2011
06:38 AM ET

Texas fires - Wildfires continue to rage in Texas. One fire near the Texas capital has charred thousands of acres as of Thursday and prompted evacuations as officials bring in more resources to help local emergency crews. Authorities are working to pinpoint the cause of the fire in Bastrop County, which has killed at least two people. An elite search team is helping local officials look for victims. The fire near Austin started Sunday and has spread across 33,000 acres, forcing the evacuations of at least 5,000 people, officials said. At least 576 homes have been destroyed in the county and that total is expected to increase, officials say. Watch hundreds of animals be rescued

Republican debate ahead of jobs speech - GOP candidates took turns blasting President Barack Obama at the latest Republican presidential debate Wednesday night.Â  It was Texas Gov. Rick Perry's first debate since entering the race last month and he and Mitt Romney went at each other over job creation, Social Security and other issues. The CNN tea party debate is Monday. That debate will likely be informed by whatever Obama says tonight in an anticipated speech about how he's going to create jobs. CNN will carry the speech live at 8 p.m. ET. It's unclear how much Obama's plan will cost. Some are figuring as much as $400 billion. It includes large investments in infrastructure and unemployment assistance.

What's left of Tropical Storm Lee - The remnants of Tropical Storm Lee are dumping heavy rain and prompting flood advisories from Washington, D.C., to western New England. Several rounds of heavy rain are in store for much of the region the next couple of days, with an additional 2 to 6 inches forecast - and in isolated cases as much as 10 inches, according to the National Weather Service. "These rains may cause life-threatening flash floods and mudslides," a weather service advisory said. Watch for updates on Lee and other storms on the National Hurricane Center's site.

Instead of burning a fuel source, solar cooking uses mirrored surfaces to channel and concentrate sunlight into a sâ€twitter.com/i/web/status/1â€¦Qd
cnni

10:31 am ET October 21, 2021 RETWEET
The Dave Chappelle comedy special, "The Closer," has thrust Netflix into its biggest crisis ever. It's a mess of thâ€twitter.com/i/web/status/1â€¦5A
cnni

10:15 am ET October 21, 2021 RETWEET
Up to a foot of rainfall is possible for Northern California this week as potentially a rare category 5 atmosphericâ€twitter.com/i/web/status/1â€¦pt
CNNweather