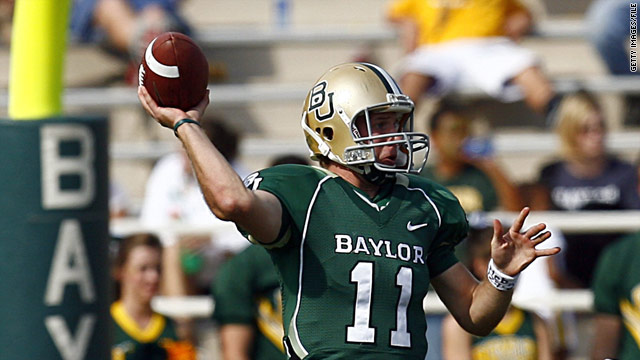 Hey, "Don't Mess With Texas Football." That message, posted on Baylor's website, comes amid Texas A&M's efforts to leave the Big 12  join the Southeastern Conference and Oklahoma's flirtation with the idea of leaving the Big 12  to join the Pac-12. As SI.com's George Schroeder explains, Baylor is concerned that the Big 12 will break up, leaving Baylor out in the cold.

Baylor, which has threatened to sue Texas A&M if it jumps to the SEC, argues on its website that the Big 12 should be preserved because it is a bastion of Texas football and tradition. Four of the conference's 10 members - Baylor, Texas, Texas Tech and Texas A&M - are in the Lone Star state.

But don't be confused, Schroeder writes. Baylor also is acting in its own self-interest:

"If Baylor really cares about Texas football, why not get the old band back together? Call Texas and Texas A&M. Add Houston, Rice and SMU," writes Schroeder, referring to some of the schools. "Convince TCU that the newly formed Big Tex Conference (Lone Star is taken) - no, let's call it the Southwest Conference - makes more sense than the Big East. Heck, why not add UTEP and North Texas? No, it doesn't really make much sense, and there's about, oh, zero chance it happens.

"Maybe Baylor succeeds in holding the Big 12 together - against the members' will - for just a little longer. Probably not. In the bigger picture, any campaign by any entity to hold off superconferences seems doomed to fail. 'Some things,' Oklahoma President David Boren told The Oklahoman, 'are trends beyond the control of any one university.' But Baylor's goal isn't to prevent the inevitable; it's to catch the ride."

New Orleans Saints vs. Green Bay Packers (8:30 p.m. ET) - In a battle of the last two Super Bowl champions, the NFL regular season kicks off with the Saints and Packers at Green Bay's Lambeau Field.

36 - Number of games the University of Miami's Jacory Harris has appeared in during his first three seasons with the team. On Wednesday, Miami's coach announced that Harris, who was suspended during Monday's loss to Maryland, would be the Hurricanes' starting quarterback when they face Ohio State on September 17.

22 - Number of wins that Tigers pitcher Justin Verlander earned this season. He notched his 10th straight victory in a 8-6 win over the Cleveland Indians Wednesday.

5 - Approximate number of hours that NBA players and owners met in New York on Wednesday to try to resolve the league's lockout.