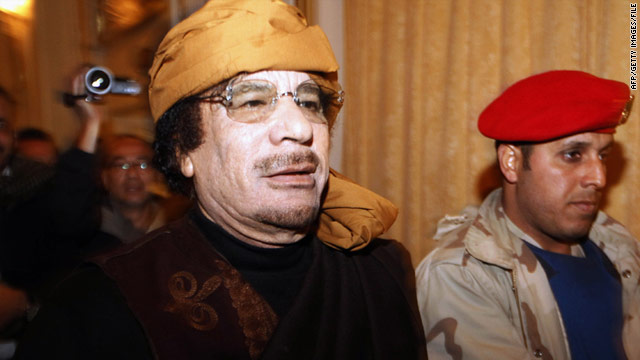 Red Notices were also issued against Saif al-Islam Gadhafi, and his brother-in-law, Abdullah Al-Senussi, who served as the regime's intelligence chief. They are also wanted for alleged killings and persecution in the Libyan uprising that erupted in February.

A Red Notice allows Interpol, the international police agency, to widely circulate arrest warrants with an intention to extradite suspects to the criminal court.

"Moammar Gadhafi is a fugitive whose country of nationality and the International Criminal Court want arrested and held accountable for the serious criminal charges that have been brought against him," said Interpol Secretary General Ronald Noble.

The request "will significantly restrict the ability of all three men to cross international borders and is a powerful tool to help in their location and arrest."

A senior U.S. official said this week the U.S. does not know where Gadhafi is and U.S. official don't think Libyan rebel leaders know either.

All businesses in Shanghai except those deemed vital (like gas stations and supermarkets) will be closed until Febrâ€twitter.com/i/web/status/1â€¦4N
cnni

8:53 am ET January 27, 2020 RETWEET
The growing memorial outside of the Staples center for #KobeBryant and Gigi. â€œThank you for all you did on the courtwitter.com/i/web/status/1â€¦yMxy
sarasidnerCNN

8:46 am ET January 27, 2020 RETWEET
"He was one of the greatest sportsmen in history." Nick Kyrgios and Rafael Nadal paid emotional tribute to Kobe Brâ€twitter.com/i/web/status/1â€¦VE
cnni