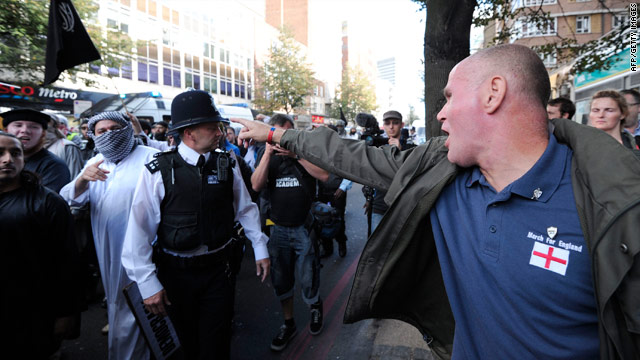 Atika Shubert: In London, a 9/11 event both solemn and confrontational

The memorial for British victims of 9/11 stands in London's Grosvenor Square at the far end of a quiet park directly across from the U.S. Embassy.

There you can find the names of the 67 British victims who lost their lives in the attacks. A set of wooden pillars stands with these words carved above them: "Grief is the price we pay for love."

On Sunday, families of those victims gathered at Grosvenor Square. Prince Charles attended with his wife, Camilla, the Duchess of Cornwall. Prime Minister David Cameron also came. They laid wreaths at the memorial and later took the time to speak with the families over scones and finger sandwiches. At the memorial, a white rose was laid for each of the 67 British victims.

The ceremony was marred somewhat by two competing protests. Muslims Against Crusades, the radical Islamic group led by Anjem Choudary, arrived shortly before the ceremony full of fiery speeches. There were fewer than 100 with him but their chants of "USA you will pay!" could still be heard over the music that played as families began arriving.

There was a brief flurry when London Mayor Boris Johnson unexpectedly showed up and decided to enter the square through the protests. He was shouted at by both groups.  As the mayor attempted to hustle his wife, Marina Wheeler, through the security barrier, one of the protesters from Muslims Against Crusades appeared to poke him with the end of a flagpole, prompting a quick response from police.

Despite all that, both groups made a relatively orderly departure by the time the ceremony was under way, leaving the park relatively quiet.

But the thing I'll remember most about the ceremony on Sunday won't be the solemn dignity of the families that attended or the undignified presence of two opposing groups attempting to capitalize on the sad event. It will be the conversation I heard between two teenagers on my way to the ceremony.

Discussing the heavy police presence in the area, one said to the other, ""All these demonstrations are for 9/11, innit?" The response: "Yeah? What happened on 9/11?"