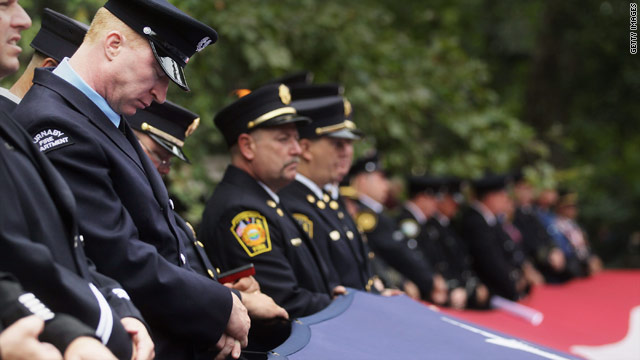 Among the memorials placed along Riverside Drive in Manhattan's Upper West Side is a massive statue - 12 feet long and 8 feet wide, and easily one of the most beautiful. It was dedicated in 1913 to firefighters who died on the job, but for the past 10 years it's become a focal point for members of the New York Fire Department. It's become┬Āa place to carve out a private ceremony where each year after 9/11 they've remembered the 343 firefighters who lost their lives in the terror attacks of that day.

"It's not about speeches and it's not about politicians," FDNY Lt. Ken Durante told me. His title is "event organizer," but really he's the guy wrangling the dozen┬ĀTV crews and cameras that have set up at 100th Street and Riverside Drive, about eight miles north of ground zero. They didn't want the media attention. This memorial was intended to be simple and to focus on the firefighters. But a bit of controversy - when firefighters were not invited to Sunday's ground zero ceremonies - focused more attention on this usually low-key event.

Fire Commissioner Salvatore Cassano says not going down to the site of the World Trade Center attacks is no big deal. Firefighters want to remember the day in their own way, with their own colleagues.

The Uptown ceremony unfolds with prayer and moments of silence to mark the terrible timeline that many of us will never forget - the moments the planes hit and the towers fell. Then, similar to the ceremony at ground zero, the reading of the 343 names. A bell chimes after each one. The sheer number, the massive loss, has changed the way firefighters view their job and train new recruits. Many experienced firefighters perished when the towers fell and hundreds of cumulative years of service and experience were lost.

The reading of the names takes more than half an hour. The simplicity seems to make the ceremony even more intense and emotional. It's not warm, but two firefighters are overcome and carried off through the crowd.

When the last name is read, Katie Devlin walks through the sea of blue uniforms to the microphone. Her father was Battalion Chief Dennis Devlin, who died at the World Trade Center. She sings "Amazing Grace."┬ĀWith no accompaniment, her pretty voice floats over those assembled. She sounds strong and confident. But close to the song's end, she begins to falter; her voice wavers. "I once was lost ..." she sings, but she simply can't continue. Katie starts sobbing softly. The crowd of firefighters, still standing at attention, and their families and the random New Yorkers┬Āwho are jogging by or walking their dogs begin to clap for her, trying to give her courage. Katie starts up again, soft and hesitant. "... but now I'm found. Was blind, but now I see." She has finished strong, and the crowd breaks into applause again. Many of us are crying with her as the ceremony ends.

By noon the crowd has dispersed. Many of these firefighters will head back to their firehouses in Brooklyn, Staten Island and other parts of New York. Others tell me they're heading to church. And several say they will "just head downtown" to be near the site that was a graveyard for 343 fire fighters who were lost on 9/11.

Left behind are┬Ānine rows of American flags, each one stuck in the ground to symbolize a fallen firefighter. They run in perfect lines up the hill to the firefighters monument, now surrounded by flowers.

Five firefighters started this tradition the first year after 9/11. They want to remain anonymous, saying the event isn't about anyone other than the heroes who died that day. They drafted their plan over a kitchen table in the Bronx 10 years ago. Today they accomplished what they set out to do: keep a focus on those who drove toward or walked or ran into the burning towers, well aware of the danger they were facing. There have been no speeches, no politicians shaking hands with constituents. It is firefighters remembering firefighters.

They'll be back next year to do it again.

Netflix's struggles are a sign that it's becoming a more traditional media company. cnn.it/3bAvWK6
cnni

11:30 pm ET August 7, 2022 RETWEET
The unexpected discovery of a 16th-century horse tooth in modern-day Haiti has provided credence for an age-old folŌĆtwitter.com/i/web/status/1ŌĆ”v2
cnni