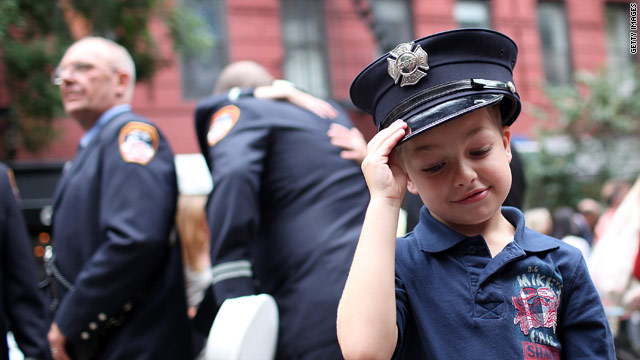 Frequently used Twitter hashtags included #Sept11, #NeverForget, #WTC, #FDNY, #Wherewereyou, #911whereiwas, #NYC, #godblessamerica, and #RIP 9 (which probably was supposed to be 9/11, but Twitter cut it off after the slash).

While many tweets sounded the same notes of honor for the dead and condolence to their families, a few stood out. Some examples:

FDNYnews: Today we honor the 343 #FDNY members & thousands of others killed 10 years ago. They were all heroes.

Queen Rania of Jordan: As we remember that tragic morning ten years ago today, let us work together for better understanding and reconciliation.

1PolicePlaza: Today we remember the 23 NYPD Officers, NYC's finest that were killed at the site of the WTC.

Anonym_Iran: On 2001/09/11, thousands and thousands Iranians went instantly in the streets with candles in homage to the victims.

JennymontyinSD (Jennifer Montgomery): I was working in the US Capitol, the Let's Roll heroes of Flight 93 prob saved my life. Peace, Love, & Remembrance to all.

Pandaa_TC: It's hard to think that the victims of 9/11 were home sleeping in bed with their families 10 years ago. RIP 9/11.

Jeffhardyforevr, a New Yorker named Dawn: Unfulfilled unfinished undone and innocent. The sadness n stress is washing over me like a black cloud. Miss you SO much Joey RIP 9/11/01

New York poet Amalie Flynn completed a year-long project to post a short poem every day to remember 9/11 and honor its victims and heroes on her blog at http://septembereleventh.wordpress.com/.

A blogger called Star Bear on WordPress.com wrote, among other things, "Things are changing, some minds are changing. There are quiet, joyful voices singing in harmony. Peace to you this day, may your heart be filled with peace - and joy."