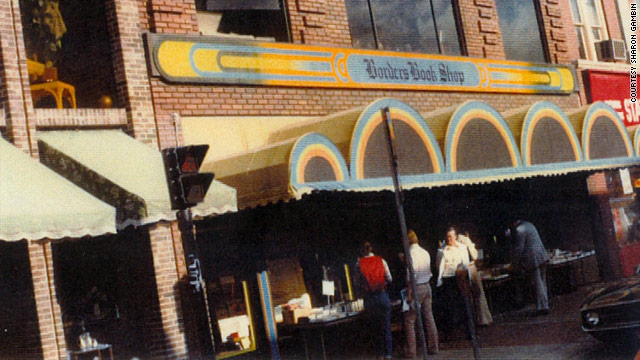 "One of the best-written articles, perhaps the best, that I've read on CNN. A fitting tribute to a passing iconic bookstore. Congratulations, Mr. Leopold." - SightSeer

"Yes, iconic corporate monster that killed hundreds of small bookstores across the country finally gets the taste of its own medicine. Live by the sword, die by the sword." - Karaya

The death and life of a great American bookstore

Forty years after its start as the prototypical big-box book store, the original Borders bookstore is shutting its doors. CNN.com readers fondly recalled exploring its treasures and shared why they thought it failed. Many said it was a fitting end to a box store that had run so many independents out of business.

binnytutu said, "Goodbye Borders. I was there at the beginning: just a very little girl, but I loved to read, and Borders was like heaven."

neason said, "My husband and I used to meet friends at the cafe when they gathered to play bluegrass music on Fridays. My son and I spent hours just browsing and reading books in the kids section. Our last visit was painful, to see the store practically looted, empty. My little guy cried when he saw the kids' section empty, sealed with yellow tape."

RobynH said, "I still remember the sense of wonder I had when Borders first came to town in Cincinnati, Ohio, in the fall of 1991. I had never seen anything like it. It was Disneyland and Willy Wonka's Chocolate Factory spun together. It was as close to heaven as I will ever find in a retail business. In recent years, Borders lost some of its charm, as it sometimes became maddening to deal with salespeople who obviously had no knowledge or love for the magical place where they worked."

RickPachtuto said, "As a former Borders community relations coordinator, I can say these stores were staffed by wonderful people who gave their all, at retail wages, to make the stores the intellectual arena they were. The dark side was Borders' structure that demanded those long (and even unpaid) hours from its employees, offered shoddy benefits, and refused collective bargaining."

drstanley said, "It was Kmart that destroyed Borders. And The Super Market Guys? Just look what they did with Circuit City and Home Depot. I remember customer service at Home Depot, when every aisle had its own associate and they knew everything inside out. Now, they rely on part-time guitar center rejects who refer to everyone as 'Dude' or 'Chief' or 'Boss."

When the pieces of memory are scattered

Former naval officer and adjunct professor Phil Kreitner, 71, suffers from mild cognitive impairment and faces the possibility of Alzheimer's disease, which killed his father. He is participating in a drug clinical trial because he believes it's his duty to humankind to help fight the disease. Many CNN.com readers sympathized with his plight and his decision to find a way to "check out" if things get too bad.

neurospace said, "Mr. Kreitner is a courageous man and a model for his fellow Americans." lurgy said, "I want to give you a big hug, and thank you for sharing your story also."

oldgaffer said, "Thank you, Mr. Kreitner, for making your story public! My intention is very much like yours, should I find myself in similar circumstances. I, too will go in a time of my choosing before I financially, physically and emotionally bankrupt my friends and family, and man's law be damned!"

georgitechur said, "My father has Alzheimer's. It started when he was 58. It's like watching the tide slowly wash away a sand castle. He described how in the early stages how he would hear a sound like a whisk broom in his brain sweeping information away. He has told me how it feels to have people talk about him to my mother while he is standing right there. He has verbalized his anger and his fears. I am watching my father slip away. And I wonder if one day it will happen to me too. I am now almost 50. Every time I forget where I am going, forget a name or forget where I placed an item, a small stone of fear settles over me. ..."

ding6 said, "After their mother's death, I refuse point-blank to put my children through this type of ordeal again. I agree completely with Mr. Kreitner, and I too will find a way to exit this life quietly and with dignity, my facilities as intact as possible when I deem the time has come. Thank you, sir, for telling us your story."

Lucy1950 said, "My father is 89 and has had Alzheimers' for about 10 years. My sister and I have both said to each other that there's no way we want to live like this, and if we show signs of heading down this road, we just want to be run off a cliff. I absolutely do not under any circumstances want to wind up helpless in a nursing home unable to care for myself. The prospect is just horrifying to me."

Impishbrat said, "When enough is enough, I'm checking out after a great party and an emotional goodbye to everyone. I won't become a burden on my family, or drain all that we worked so hard for. That will be MY final gift to them. I am in control of my own suffering, ultimately. No law, man or faith has a right to tell me where it all ends."

More Arctic land was revealed as sea ice there melted to a historic low, researchers from the University of Bremen in Germany reported. Researchers attribute the continuing ice melt to man-made global warming. Many CNN.com readers responded to those who questioned the report or its significance.

a2rjr said, "What science? Made up statistics can give you the answers you want to prove a point that doesn't exist without the falsehoods. It's a big lie!"

Brewmaster said, "How this issue became politicized is beyond me. I consider myself a conservative, but the way Republicans can willfully disregard science and logic has made me lose faith in the party."

Dan, TX, said, "I agree with you. It is pretty clear that burning fossil fuels is contributing to the warming and that there will be long-term consequences to this. We don't need people declaring science as being an unreliable method for understanding things. Science is really important, scientists are very self-critical, and denigrating science for political purposes is vile."

mortalc01l said, "When more than 98 percent of all climate scientists in the world - PhDs, the best educated people in this science - agree that the climate is changing and it is partially due to human pollution, then those of you decrying their educated opinion are full of hot air (no pun intended). Let's leave the heavy thinking to people who know what they are talking about! If 98 percent of all neurosurgeons told you you had a brain tumor and it had to be removed or you would die, I'm pretty sure you would listen."