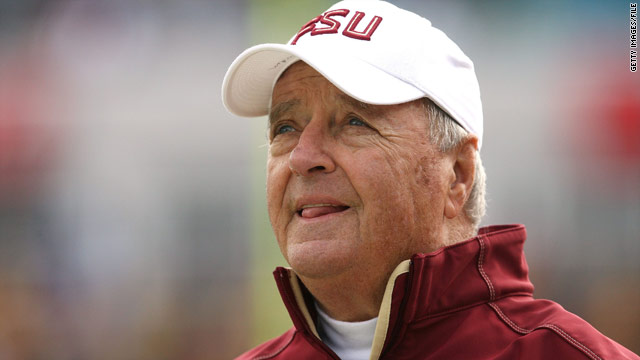 Retired Florida State football coach Bobby Bowden revealed Tuesday that he was secretly treated for prostate cancer in 2007 while he was still coaching.

"I wasn't ashamed of it," Bowden said in an appearance on CNN's "American Morning," explaining why he did not reveal the disease sooner. "I didn't want it to get out because I didn't want my opponents to use it against me."

He said other coaches would have used the information to steal recruits from the Florida State program that he led to two national championships, 12 conference championships and 28 consecutive bowl games on the way to amassing more than 300 wins. Bowden retired in 2009.

Bowden said he learned he had cancer after a routine examination by the Florida State team doctor, Kris Stowers. A few days after the exam, Stowers called and said a blood test had revealed a "little problem," said Bowden, who was 77 when he was diagnosed.

Stowers quickly arranged a clandestine visit to a urologist Bowden once coached.

In a USA Today interview, the doctor, Joe Camps, said he treated Bowden under an assumed identity in a midnight operation at a Florida hospital.

"But I am absolutely stunned this has remained secret for so long," the newspaper quoted Camps as saying.

Bowden had small radioactive pellets surgically implanted in his prostate to kill the cancer cells and is now cancer free, according to the USA Today story.

10:00 am ET January 25, 2021 RETWEET
An exceptionally well-preserved fossilized skull has revealed new details about how a crested dinosaur got its fancâ€twitter.com/i/web/status/1â€¦Vt
cnni

9:37 am ET January 25, 2021 RETWEET
"This would stop the epidemic." N95 masks are considered the gold standard in personal protective equipment becausâ€twitter.com/i/web/status/1â€¦xa
cnni

9:29 am ET January 25, 2021 RETWEET
Europeans got more of their electricity from renewable sources than fossil fuels for the first time last year, accoâ€twitter.com/i/web/status/1â€¦nH
cnni