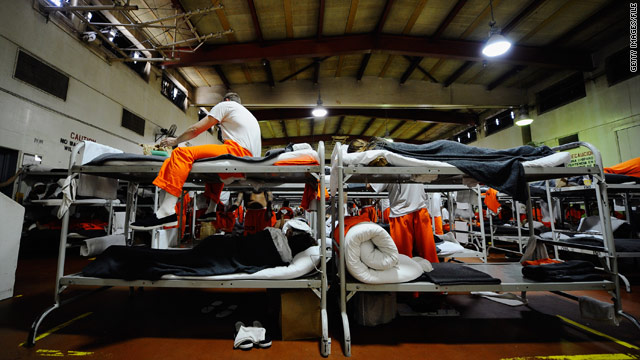 Thousands of women inmates from California prisons could soon be released to be reunited with their families under a program the state began implementing on Monday.

The California Department of Corrections and Rehabilitation said offenders whose crimes were nonviolent, nonserious and not sexual, with less than two years remaining on their sentences, are eligible for the Alternative Custody Program, which was signed into law in 2010 by then-Gov. Arnold Schwarzenegger.

“Approximately two-thirds of CDCR’s female inmates are mothers whose children are either with relatives or are in foster care,” CDCR Secretary Matthew Cate said in a press release. “ACP is a step in breaking the intergenerational cycle of incarceration, as family involvement is one of the biggest indicators of an inmate’s rehabilitation.”

About 45% of the state's 10,000 female inmates may be eligible for the program, the CDCR said. It may be made available to male inmates in the future, the department said.

Those admitted to the program will wear electronic monitors and be supervised by a parole agent, the CDCR said. They can serve their remaining time at home or in a residential substance-abuse or transitional-care facility, according to the agency.

The prisoners will be allowed to find jobs or attend classes during their release, the department said.

The state of California should save about $6 million a year under the program, the CDCR estimated.

California is under federal pressure to reduce inmate populations. The Supreme Court this summer upheld a lower court ruling that medical and mental health care for inmates in the state prison system falls below the level required by the Constitution.

Gov. Jerry Brown signed into law in April a plan to reduce prison crowding by moving 33,000 low-level offenders to county jails. But the state is cash-strapped, and funding for that plan, estimated at $460 million in the first year, must be approved by voters in November.