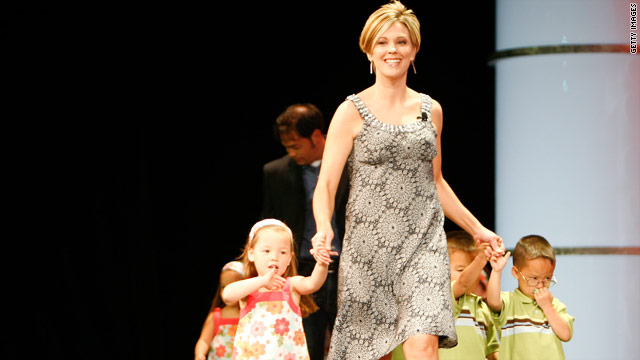 Gotta Watch: The end of 'Kate Plus 8'

TLC's "Kate Plus 8" may not have been as epic as, say, "M*A*S*H" or "Seinfeld," but we certainly won't forget it. The six-year-old series, which was called "Jon and Kate Plus 8" until Kate Gosselin and her husband divorced and he was fired from the show, came to an end Monday night. Today, Gotta Watch looks back at Kate's advice to "Octomom" Nadia Suleman, the Gosselin's ugly custody war and Kate's short-lived stint on "Dancing With the Stars."

Advice to 'Octomom' - If you mention Kate Gosselin and Nadia Suleman in the same sentence nowadays, it may seem like a setup to a joke. But, not so long ago, we actually asked Gosselin what advice she'd give the so-called "Octomom" when Suleman's kids were born.

Kate's dancing shoes - Kate's appearance on "Dancing With the Stars" fired up fans and critics alike, but it also stoked the 4-alarm inferno that was her custody battle with ex-husband, Jon.

He said, she said - We had a ringside seat to some of the lowest lows in Jon and Kate's shattered relationship. Here, Jon reads a private email from Kate on camera and Kate cuts short Jon's visit with the kids on their birthday.

The FedEx shooting ŌĆ£probably only lasted one to two minutes,ŌĆØ the deputy chief of criminal investigations for Indtwitter.com/i/web/status/1ŌĆ”JGLetX
cnni

6:00 am ET April 16, 2021 RETWEET
Arsenal star Pierre-Emerick Aubameyang has been recovering in hospital after catching malaria while on internationaŌĆtwitter.com/i/web/status/1ŌĆ”4A
cnni